McLaren Elva revealed with 800 horsepower, no windows or roof

Home/Blog/McLaren Elva revealed with 800 horsepower, no windows or roof
Previous Next

McLaren Elva revealed with 800 horsepower, no windows or roof

McLaren’s latest Ultimate Series hypercar has been revealed, and its name is Elva. The McLaren Elva is an open roadster named and themed after the open race cars built by founder Bruce McLaren and the Elva sports car company in the 1960s. This new car is the lightest and one of the quickest cars from McLaren yet.

The new Elva’s resemblance to the classic race car is clear with undulating, exaggerated wheel arches, discreet rear air scoops, low nose and completely exposed cockpit. But it has trademark design cues from modern McLarens such as the squinting headlights, slender taillights and a tail dominated by air vents and a diffuser. The Elva has no roof or windows, but it does have McLaren’s typical butterfly doors, and a windshield will be available as an option.

Hidden under the voluptuous body is a version of the McLaren Senna’s twin-turbo 4.0-liter V8, but thanks to a high-flow exhaust, it now makes 804 horsepower and 590 pound-feet of torque. It’s coupled to a seven-speed transmission that sends power to the rear wheels only. McLaren says the engine will propel the car to 62 mph in under 3 seconds, and it will hit 124 mph (200 kph) in 6.7 seconds, which is faster than the Senna.

This is in part made possible by the Elva being the lightest McLaren road car yet. A final weight hasn’t been announced, but we know it’s less than the 2,900-pound Senna. Much of the credit for the weight savings goes to the new carbon fiber chassis and body, plus the lack of any kind of driver enclosure. McLaren doesn’t even include an audio system as standard (it’s a no-cost option) to help keep the weight down. The seats are made of carbon fiber. Even the brakes, which are based on the already light setup in the Senna, get titanium calipers that save about two pounds in total. 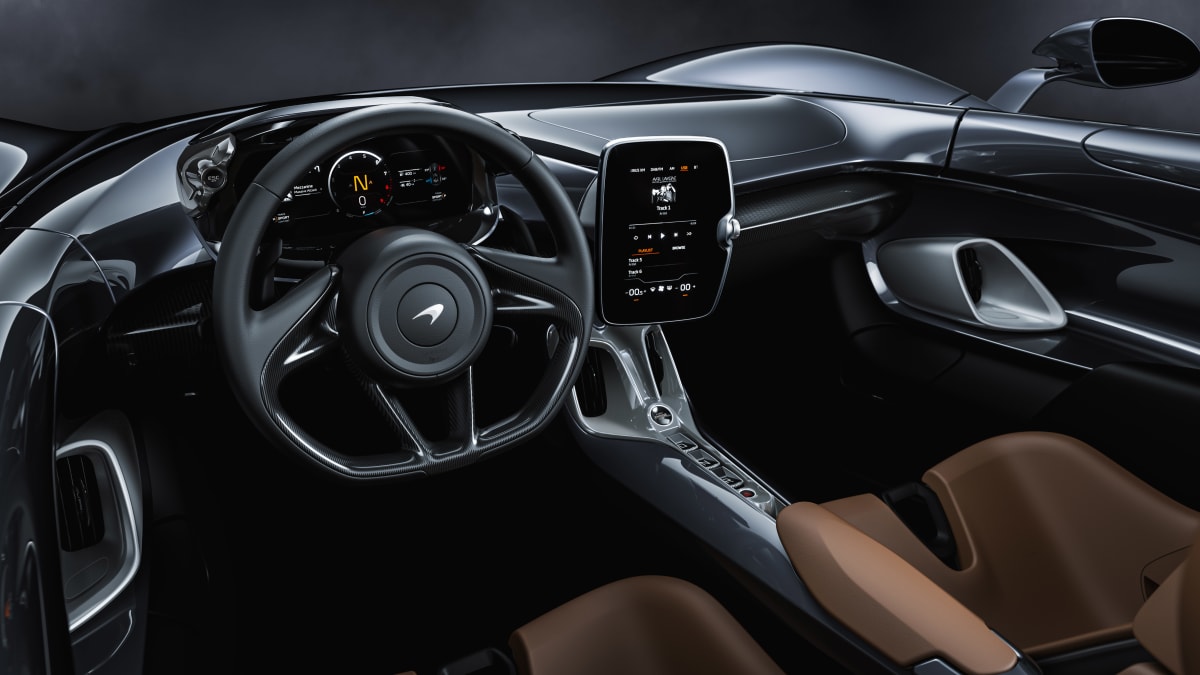 While light and serious, McLaren has still tried to make the driving experience reasonably comfortable. It has implemented a fancy set of vents, vanes and deflectors in the front of the car called the McLaren Active Air Management System to channel air around the passenger compartment. That way, the “cabin” is still tolerable even if you’re not wearing a full-face helmet. If you do decide to wear a helmet, there is a storage area under the cowls behind the seat that has space for your headgear. The seats can be covered in a variety of materials from leather with additional protective coatings to a new durable, breathable fabric. The Elva also gets McLaren’s latest infotainment system that spans eight inches and has a control wheel hanging off the side, almost like the crown on a watch. If you do plan on using the Elva purely for track use, though, you can skip adding the windshield or sound system and add the optional six-point seat harness instead. Or add all of them — McLaren will spec the car out however you want.

McLaren will spec out only 399 Elvas, though, so get your order in while you can. Make sure your bank account is healthy, too, as the base price for a McLaren Elva is $1.69 million. That’s roughly $700,000 more than the Senna, but it is a bit more exclusive, and it accelerates a little harder.