Having not packed a mobile laboratory to sample and sniff the Jeep’s tailpipe emissions — though academic lab researchers will get to that soon enough — we’ll have to take their word for it. Some reassurance is provided by the 5.1-gallon tank of Diesel Emissions Fluid (or DEF) that’s visible below the Jeep’s rear bumper, surrounded by its own skid plate to ward off blows during off-road maneuvers. That’s enough smog-fighting fluid to last roughly 10,000 miles, prior to a refill via a nozzle adjacent to the diesel fuel filler.

Jeep fans who’ve been clamoring for a diesel option will likely focus on the Wrangler’s larger, 18.3-gallon fuel tank (versus 17.5 gallons in gasoline models), and the advantages contained therein: All-day driving range to go with a solid jump in highway fuel economy, beefy torque and diesel durability.

During a bright-and-early outdoors presentation near Zion — just days from the park’s 100th anniversary — a row of handsome, candy-colored Wranglers await our test. Jeep executives promise the 3.0-liter turbodiesel V6 will return a highway driving range beyond 500 miles, besting the Wrangler Unlimited’s current best of 452 with the turbo inline-four or 430 with the standard V6. Overlanders are bound to appreciate the increase.

EPA fuel economy numbers weren’t yet available (Jeep expects them any day now), but that 500 miles sounds more-than-doable. Once underway, the Wrangler shows 32 to 34 mpg, with as little effort as it takes to match the highway speed limits. That’s a commendable new high in mileage for any Wrangler, with its brick-like aerodynamics and off-road-spec tires. An educated guess suggests the Wrangler EcoDiesel will secure an official rating of 22 mpg city and 29 mpg highway, with the EPA underestimating its real-world mileage, as it does with many newer diesels. Applying that 29 mpg figure, consuming 17.5 gallons of the Wrangler’s available 18.3 would equate to 508 miles of range, which again computes with that potential EPA reading.

Still, even that conservative figure represents a considerable improvement versus the Wrangler Unlimited with the efficient optional 2.0-liter turbo four, which earns an official EPA estimate of 21 mpg city and 22 mpg highway. The standard 3.6-liter gas V6 returns an official estimate of 19 mpg city and 22 highway with the optional eight-speed automatic. The standard six-speed manual is effectively 1 mpg worse. Note that the EcoDiesel is only available with the four-door Wrangler Unlimited.

Even if real-world fuel economy does in fact beat the eventual official specs, the performance does not: The on-paper promise of 260 horsepower and, especially, a robust 442 pound-feet of torque from the Italian-built 3.0-liter V6 is belied somewhat by leisurely acceleration and noticeable turbo lag when you squeeze the accelerator. Don’t forget that the EcoDiesel is also the heaviest Wrangler, with as much as 4,862 pounds punishing the scales in Rubicon trim. Depending on trim level, that’s between 330 to 487 pounds more than comparable gasoline models. A pokey 0-60 mph run in the 9-second range seems likely, well off the sub-7-second pace of either the turbo four or gas V6 versions.

There’s just-right passing power from both 30-50 mph and 50-70 mph, aided by a smooth eight-speed automatic transmission (no manual is available) that keeps the engine in its narrow sweet spot, between roughly 1,200 and 3,000 rpm. But at no point will you or your passengers be saying “Wow!” over the grunt on tap. OK, maybe when you’re storming over a sand dune in a higher gear than you’d ever manage in gasoline models, but that’s about it. Towing capacity is unchanged as well, matching the 3,500-pound trailer rating of four-door gasoline models.

Yet FCA’s Gen3 diesel does itself proud when it comes to smooth operation, including its barely detectable diesel click-clack at idle. The engine, which is already available in the Ram 1500 and will be added as an option to next year’s Gladiator, is lavishly redesigned versus the Gen2 diesel that Jeep briefly offered on the Grand Cherokee. The graphite-iron, 60-degree engine block weighs 15 fewer pounds, and the head, intake ports and lower-friction turbocharger are all new components. A low-pressure Exhaust Gas Recirculation system (or EGR) no longer steals energy from the turbocharger to do its thing, and there’s added vibration damping in the lower oil sump. A new automatic stop/start system reduces fuel consumption and emissions at idle, though its restarts are on the ragged side. Compared to the engine’s use in the Ram, the Jeep version’s alternator moves higher on the engine to allow deep-water fording.

It wouldn’t be a Wrangler drive without some hardcore off-roading, in some cases with tops off (or folded) and doors removed, an inimitable part of the Jeep’s charm. Jeep obliges with a detour to Sand Hollow State Park, and its public-access trails that host everything from pickup trucks to side-by-sides. With the tires aired down to about 20 psi, the torture test begins through deep, red-desert sand. Hired spotters guide us through some wicked, highly technical rock obstacles that challenge every bit of the Jeep’s ground clearance (a maximum 10.8 inches for Rubicon models) and capabilities. Those include a sway-bar disconnect that allows 30% more suspension articulation, and axle lockers front-and-rear that come in handy on half-blind climbs up daunting inclines and over sand-dusted boulders. Following a muscular tug of the secondary shift lever to access low range, the diesel’s crawl ratio of 70:1 is also unmatched among Wrangler models.

The daylong drive further underlined the all-around greatness of the JL-generation Wrangler that debuted in 2018, including its major advances in handling, a strong and rattle-free chassis, and a smartly designed interior. Switching to the more luxurious Sahara model — in a handsome, slate shade of paint called “Sting-Gray” — we head onto the pavement and set course for Zion’s spectacular Canyon Overlook Trail, which is intended for hikers, not off-roaders. The equally splendid drive route takes me up Zion’s renowned switchbacks and through the 1.1-mile tunnel bored through mountain rock, the epic engineering feats that opened the once-impenetrable canyon to cars and tourism 100 years ago. Even on foot, Native Americans and settlers alike had a hell of a time accessing the canyon in bygone days, for themselves or for livestock. Following a hike, and with the moon rising over Zion’s majestic formations, I rock the Jeep down the switchbacks at speeds that would have befuddled any previous-generation Wrangler or sent it plummeting over those sheer cliffs. Sure, your average crossover SUV rides and handles better, but none of them can touch the Jeep’s 4×4 talents.

Jeep has seemingly reasonable expectations for EcoDiesel sales, figuring that at least 10 percent of Wrangler buyers will opt for one. The engine is available on every Wrangler trim level — Sport, Sahara and trail-busting Rubicon — but again, only in four-door Unlimited guise. No real loss there, since four-door Unlimiteds are now responsible for between 80% and 90% of Wrangler sales, according to Jeep brand chief Jim Morrison. 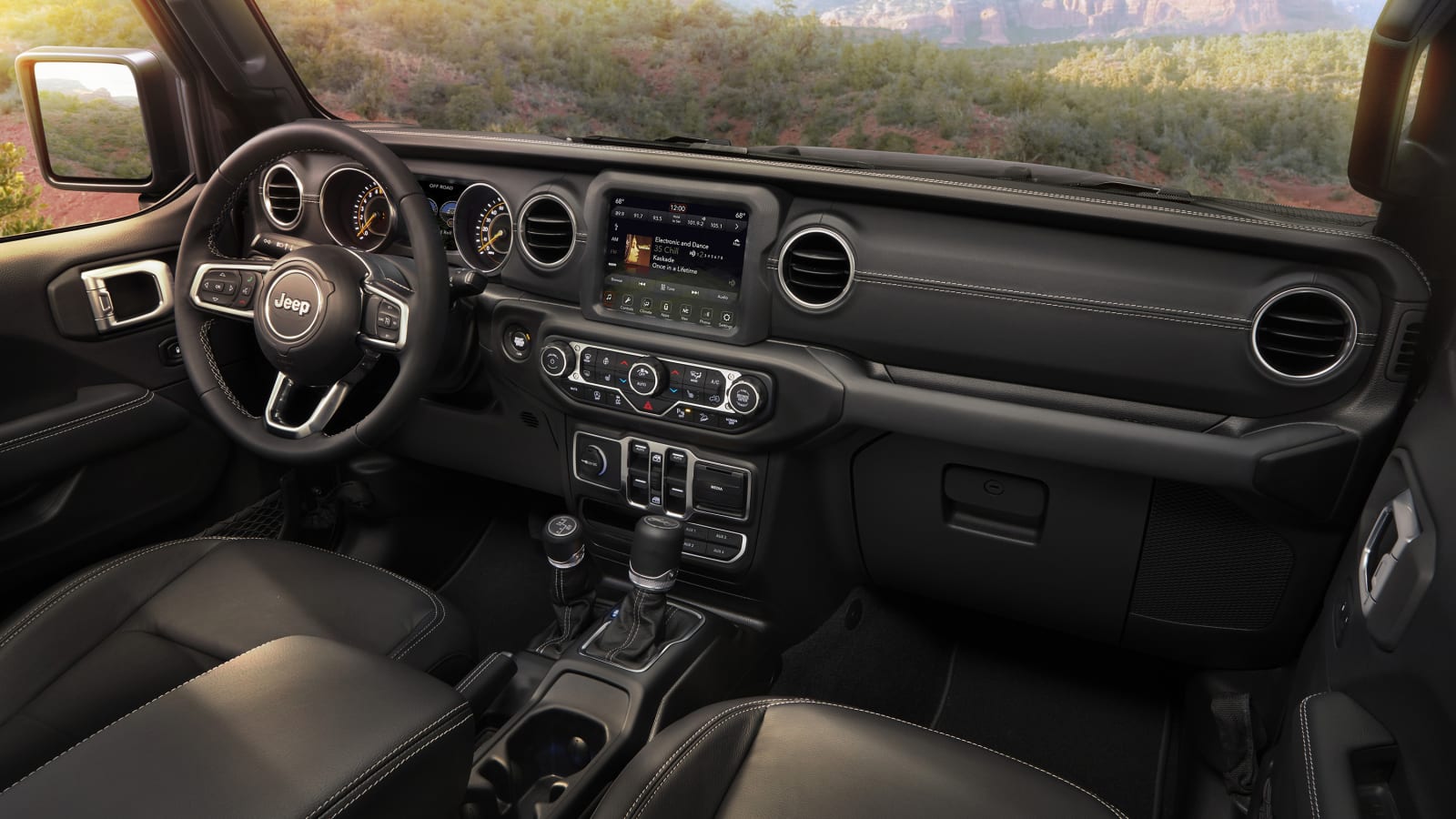 My own hunch is that the EcoDiesel’s biggest obstacle won’t be found off-road, but on the sticker. This fourth-generation Wrangler JL has evolved into a relatively expensive SUV, especially in high-level trims, and the diesel option makes it more so. The Wrangler EcoDiesel starts from $39,290 in base Sport trim, including the $1,495 destination charge. That’s a $4,000 surcharge above a Sport trim with the 3.6-liter V6 and an automatic, and $4,500 more than the same model with the 2.0-liter turbo four. One leather-wrapped Sahara model I drove stickered for $56,750; a loaded EcoDiesel in Rubicon trim brushes $60,000.

Really, unless you’re the buy-and-hold type — willing to see that diesel running strong after 200,000 miles or more — the fuel savings and driving range don’t quite justify the premium on a Wrangler that can already blow a budget if you’re not careful. (A long list of pricey options includes the Sky One-Touch Power Top at $3,995). Don’t forget that diesel fuel currently costs 15 percent more on average than gasoline, at $3 per gallon versus $2.60, blunting much of this Wrangler’s mileage advantage. Of course, prices can be about the same in some places, such as on the West Coast, but the fact remains the chances of saving money is slim given the hefty premium.

Diesel fanatics and overlanders may still crave this Jeep, of course, and the model’s resale value should be strong. But it still seems like a good idea to apply some strong-arming torque to Jeep salespeople to keep the monthly payment in check.