WANSHIP, Utah — This isn’t our first time in the new 2020 Mercedes-Benz GLS-Class, but it’s the first time we’ve actually driven one. A month or so back, we were relegated to the passenger seat while Mercedes’ engineers had all the fun. But now we’re in the drivers’ seat, and we’ve traded Nevada’s sandy terrain for the green, snow-capped mountains and rocky trails east of Salt Lake City. After a day and a half and hundreds of miles behind the wheel, we can say this: the new GLS is one of the best Benzes in production today.

Mercedes is calling the GLS the S-Class of SUVs. Its engineers wanted to capture the S-Class’ ethos, combining luxury, technology and design in a quiet, comfortable and refined package. With the GLS’ new all-wheel drive system and off-road package, it’s all of that in a go-anywhere package.

The Alabama-built GLS debuted just over a decade ago as the GL-Class, sitting atop the ever-growing Mercedes-Benz SUV lineup. Mercedes had already nailed the GLS’ basic formula over two generations, so the automaker focused on refining it further with two new, more powerful, and more efficient engines. A new all-wheel-drive system draws some influence from the tried-and-true G-Wagen. It’s also loaded with the latest driver assistance features and the trick E-Active Body Control air suspension that debuted on last year’s GLE-Class. 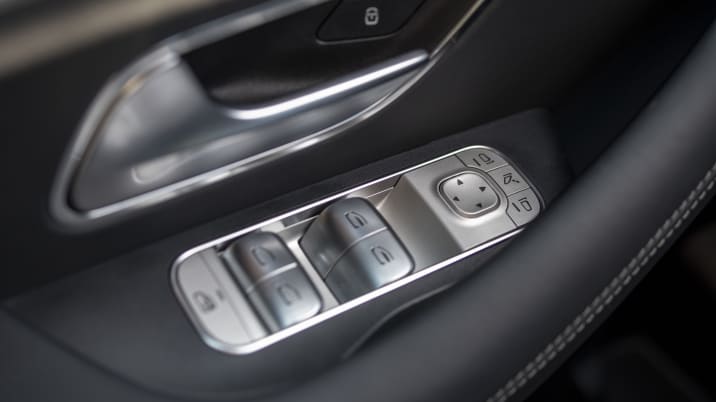 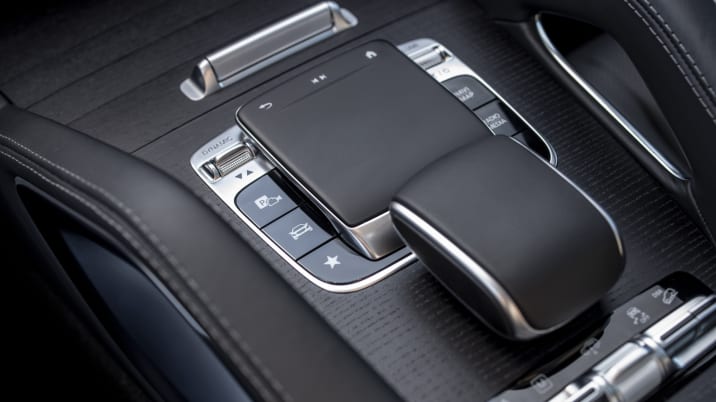 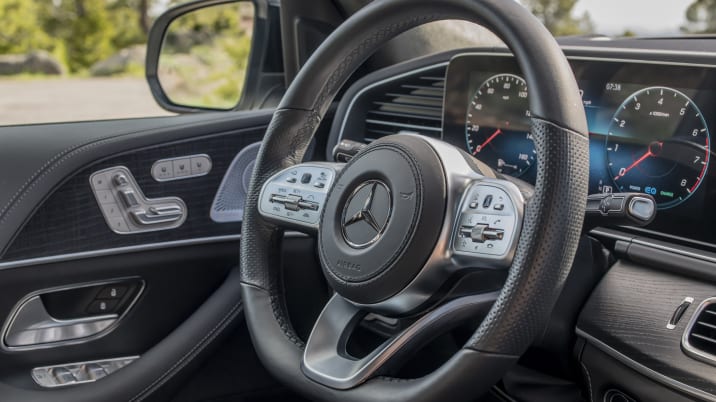 The third-gen GLS is slightly larger than before. Its 2.4-inch longer wheelbase has an inch on its nearest competitor, the 2019 BMW X7, and it’s even longer than the long-wheelbase Range Rover. Passengers in the second row are treated to a copious amount of legroom. A new six-seat variant swaps a second-row bench for two captain’s chairs. With the seats slid all the way back, legroom is up 3.4 inches. Third-row space has increased, too, with enough room for a pair of adults to sit comfortably, at least for short distances.

It’s not just about more space, either. The GLS offers five-zone climate control, with the third row getting its own electrically-powered heater and A/C unit. Third-row passengers get optional heated seats in addition to a pair of USB ports (nine in total) and a standard wireless charging pad, meaning everyone in the car should be able to charge their devices at once. 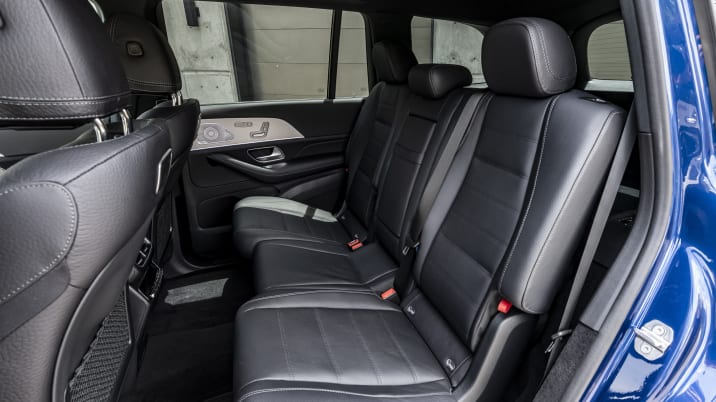 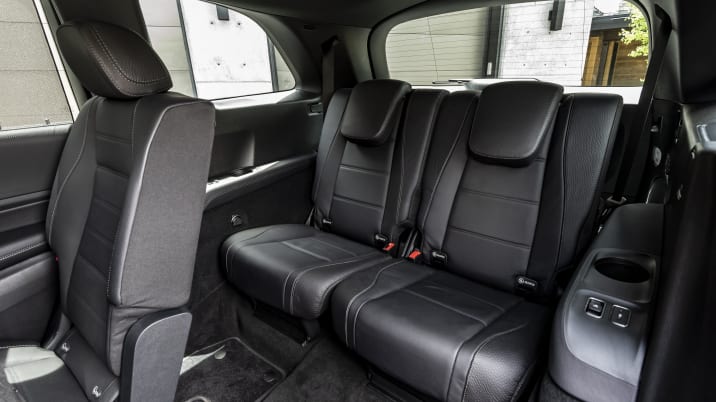 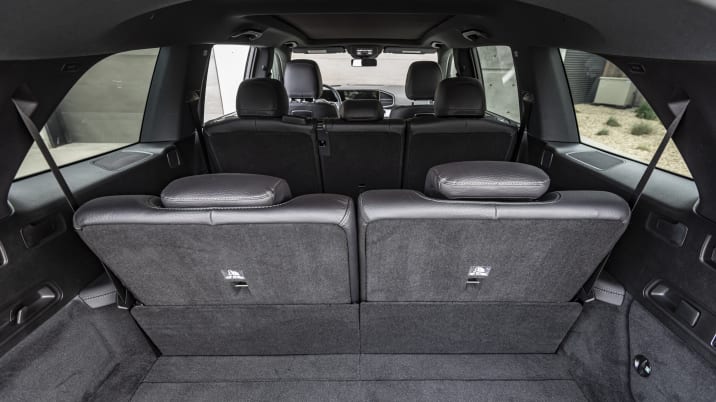 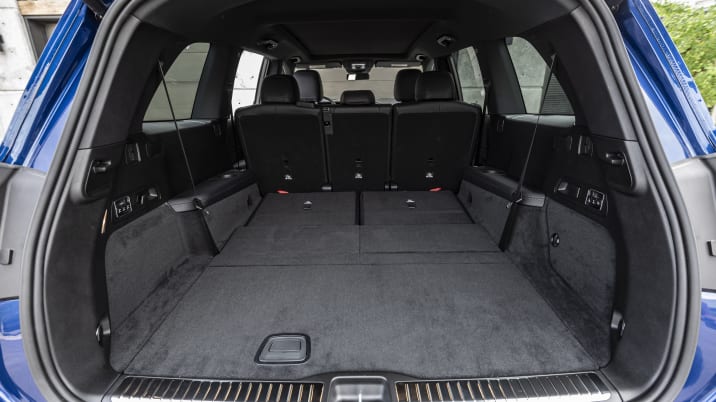 The interior design itself hews closely to the current Mercedes corporate look, in particular the new GLE class – handsome, clean and typically German, though the ultra-wide instrument cluster/infotainment screen isn’t going to be everyone’s cup of tea. The materials are both pretty to look at and a pleasure to touch, with leather, wood and metal covering nearly every surface save for the headliner. Even the shifter and turn signal stocks have received some attention, so it doesn’t look like a parts bin special inside. But more importantly, the highly adjustable seats with optional massage functions keep bodies from becoming too fatigued after hundreds of miles between stops. If you’ve been in any recent Mercedes product, it will all be immediately familiar, but no less impressive for it.

Mercedes new MBUX infotainment system is a huge improvement over the previous system, so we’re glad it’s making its way into more and more models. The interface is cleaner than before, and we like that there are several ways to interact with the system: a new center console touchpad, as well as voice command. In our experience, the voice commands work better than BMW’s. The augmented reality navigation directions are particularly impressive. It debuted with MBUX in the new 2019 Mercedes-Benz A-Class. It overlays addresses and arrows over what the camera is showing in the center screen. It helps show exactly where you’re at as opposed to a small arrow on a map. That said, the infotainment as a whole isn’t quite as handsome or straightforward as what you find in recent BMW and Audi products. The controls on the steering wheel are small, and the multitude of buttons means you have to take your eyes off the road for simple tasks, like setting the adaptive cruise control or switching menus in the digital instrument cluster. 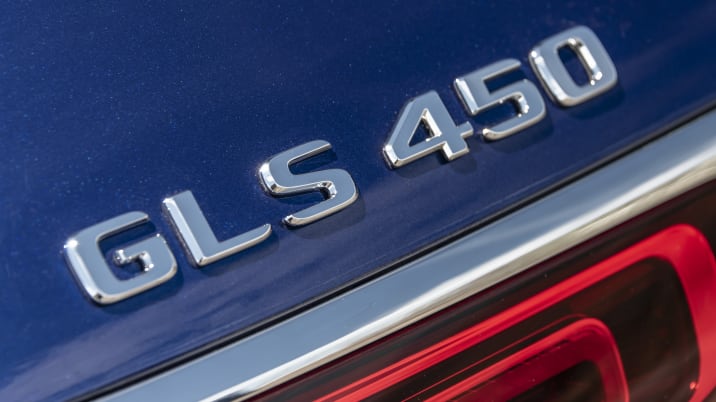 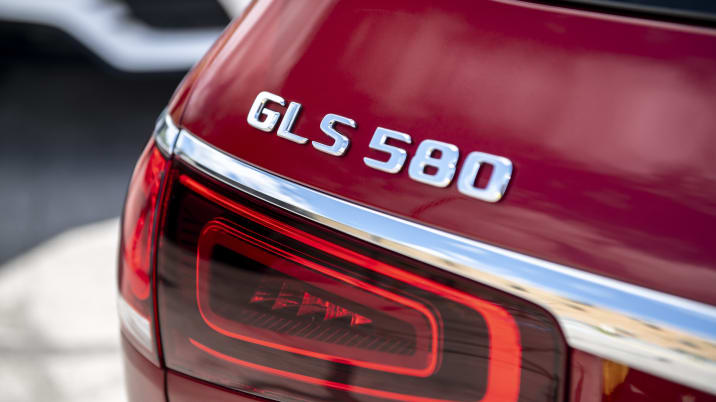 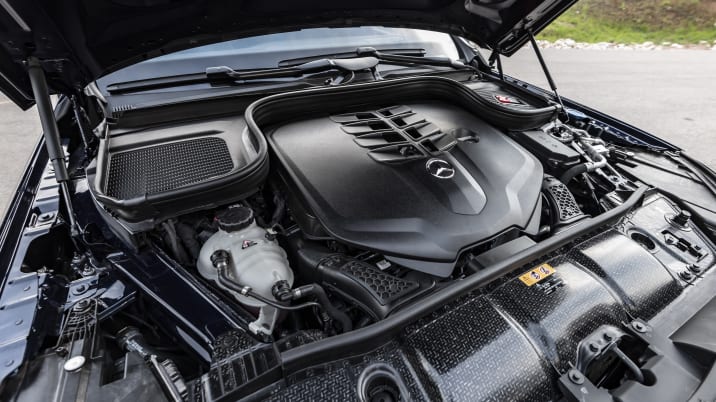 The GLS has two new (and rather complex) engines, a 3.0-liter turbocharged inline-six making 362 horsepower and 369 pound-feet of torque and a 4.0-liter twin-turbo V8 making 483 horsepower and 518 pound-feet of torque. Both are paired with a 48-volt mild hybrid system Mercedes calls EQ Boost, increasing fuel efficiency and performance. Both systems work the same way. A small electric motor is placed between the engine and transmission and performs a variety of tasks, from smoothing out shifts to mitigating turbo lag by supplying a bit of low-end power while exhaust gasses spool the turbos. It even powers the accessories, meaning these engines are beltless. That makes them more compact, but it also means there’s less parasitic loss from accessories such as the A/C compressor. This is the first time the system is available with a V8 engine, but expect the powertrain to expand to much of Mercedes’ lineup over the next few years.

We’ve sampled the EQ Boost in a variety of models, mostly variants of the E- and CLS-Class, and have been hugely impressed. The system was a finalist for Autoblog‘s Technology of the Year. Like in those other cars, the GLS’ power delivery is smooth and linear, with lots of low-end torque to help you off the line and move through traffic. With the kick of torque and lack of turbo lag, these don’t feel like other small-displacement turbo engines, including those from Mercedes. There’s power all over the rev band, and while fuel economy ratings haven’t been revealed, expect a significant improvement over last year’s model. While the new V8 in the GLS 580 is knockout, with effortless power and a throaty exhaust note at full bore, the 3.0-liter in the GLS 450 is offers plenty of power day-to-day and is a good value on its own.

All GLS models send power to all four wheels through a nine-speed automatic transmission. It’s smooth and unobtrusive like any good automatic should be, and it’s right there with ZF’s seemingly ubiquitous 8HP 8-speed automatic in terms of refinement.

The new four-wheel drive system is far more noteworthy. The old GLS’ system had a fixed 50:50 front-to-rear torque split, but the new model is fully variable, sending 100-percent of the power to the rear wheels in most situations and up to 50-percent of the power to the front when needed. It should help improve traction in all situations, but on loose surfaces like sand, gravel or dirt, it’s pretty damn easy to induce oversteer to help the rear of the 17-foot-long SUV rotate like a vehicle half its size. It’s amazing just how nimble the GLS feels, especially off road or on tight switchbacks. The turning radius is extremely tight, making it feel and drive like a much shorter and narrower vehicle.

While no GLS owner is actually going to be doing any serious off-roading, the GLS is plenty capable, especially with the new off-road package. The package includes a real, legitimate low range for better crawling and an enhanced Off-Road+ mode that adjusts things like throttle response, suspension and transmission tuning. The GLS also includes hill-descent control and adjustable ride height. All told, the GLS is similar to the Range Rover in that it’s far more capable than it realistically needs to be.

The new engines and four-wheel drive system are great, but the single most impressive thing about the 2020 GLS is the ride. The standard air suspension offers a smooth and isolating ride for such a big SUV, but the optional E-Active Body Control is something really special. It’s a complicated system (if you haven’t gathered it by now, most of what makes the GLS good is complicated), but the basic premise is that a camera reads the road ahead and pre-loads the suspension for any imperfections. Unlike some reactive systems, this knows what’s coming up ahead, smoothing out imperfections and potholes like they aren’t even there. We expected it to work well on the pavement, but the way it seemingly flattens out a dirt road is truly transformative. While it’s mainly responsible for improving ride, E-Active Body Control can help you get unstuck in mud or sand. It looks a bit goofy bouncing up and down like an Impala in a ’90s music video, but it works. 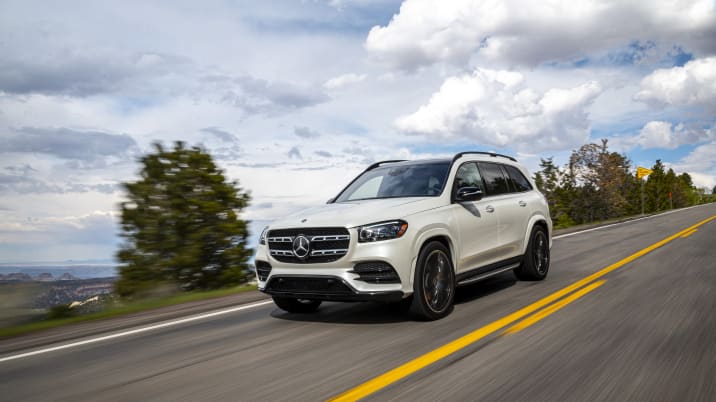 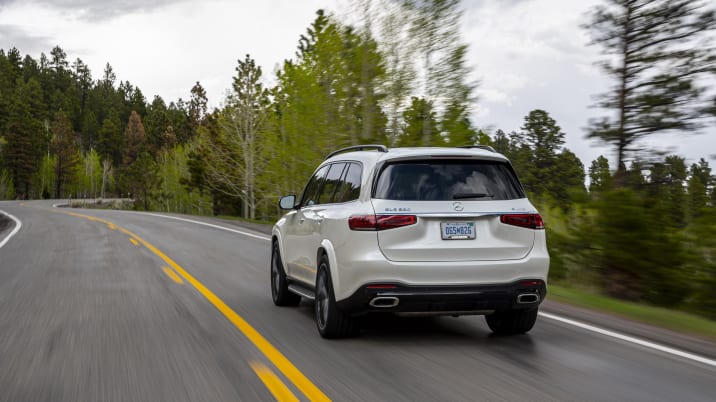 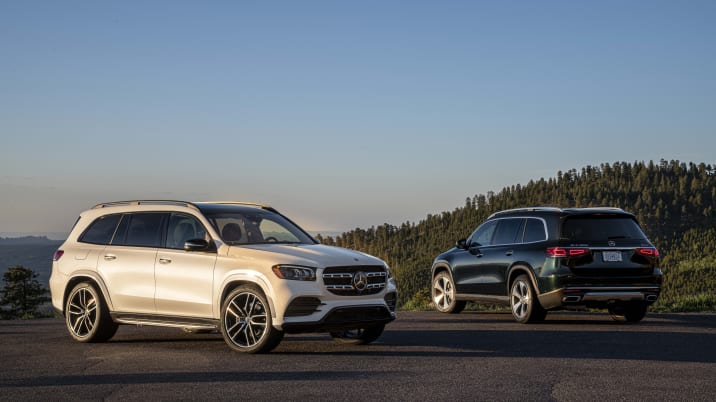 The way the whole package comes together is wonderful. On the road, the GLS wafts along smoothly and silently (unless you really put your foot to the floor). The powertrain, four-wheel drive system and air suspension work imperceptibly and harmoniously, masking all of the complexity behind a veneer of comfort. There’s little to no body roll through corners thanks to the so-called Curve drive mode, which leans the GLS into corners. The steering is quick and not overly heavy, and the brakes are firm and don’t have the spongy feeling the X7’s brake-by-wire system occasionally exhibits. Frankly, it’s a wonderful place to soak up hundreds of miles at a time.

A base six-cylinder GLS 450 starts at $76,195, a $5,050 step up from last year’s model, though it now includes features like a Burmester sound system, Apple CarPlay and Android Auto, and blind-spot monitoring. Other standard features include push-button start, remote ignition, adaptive LED headlights, passenger seat memory settings, and 64-color ambient lighting. For comparison, a BMW X7 xDrive40i starts at $74,895. Stepping up to the V8-powered GLS 580 will set you back $98,795, a sizeable step above the $93,595 V8-powered X7 xDrive50i. A long-wheelbase Range Rover starts at $111,245, and again, isn’t available with a third row. While E-Active Body Control pricing hasn’t been announced for the GLS, it’s a $8,100 option on the GLE-Class.

Taking a step back, the new GLS is more than the sum of its improvements, and those improvements touch nearly every aspect of the vehicle. It is the epitome of where Mercedes is headed, seamlessly tucking away its frighteningly complex and ambitious systems under a veneer of ease and convenience. Despite gaining more comfort and convenience, the GLS too becomes more capable off-road, although it cedes the requisite ground to the all-conquering G-Class. Even so, it’ll clamber about on rough trails with few rattles and no protestations, trading off virtually nothing of note for that capability. It’s indeed the S-Class of SUVs.