BEND, Ore. — Reaction to Chevy’s redesigned half-ton Silverado has been muted at best. Though certainly more than capable, the new 1500 just doesn’t go far enough to fully compete against its Ram and Ford competitors. The 2020 Chevrolet Silverado HD models are an inherently different story, however, as they are intended for inherently different purposes.

Many folks buy a 1500 simply because they want a truck — for style or because they occasionally could use one. By contrast, buyers of heavy-duty models need a truck. According to Chevrolet, 90% of HD buyers use it for trailering.

And by “trailering” we don’t mean a dirt bike or a small bass boat. We’re talking big things, such as one of the roughly 100,000 fifth-wheel RV trailers that were sold in the United States last year. In fact, 2018 was the third-largest sales year for RVs in general, pointing to their increased popularity and therefore the increased importance of heavy-duty trucks like the Silverado 2500 and 3500.

This difference in use can be seen in the sales mix of Silverado models. If you were to plot it on a graph, the 1500’s sales mix would look like a bell, with the mid-grade LT and RST being the volume sellers. The HD models are the exact opposite, with a graph resembling a bowl. Basically, businesses buy the Work Truck and Custom, whereas recreational buyers go with the range-topping LTZ and High Country. As such, during our first drive of the 2020 Silverado HD, we tested a Custom with the new 6.6-liter gasoline V8 and a High Country in the HD’s volume-selling combination: a Crew Cab with the optional diesel engine. 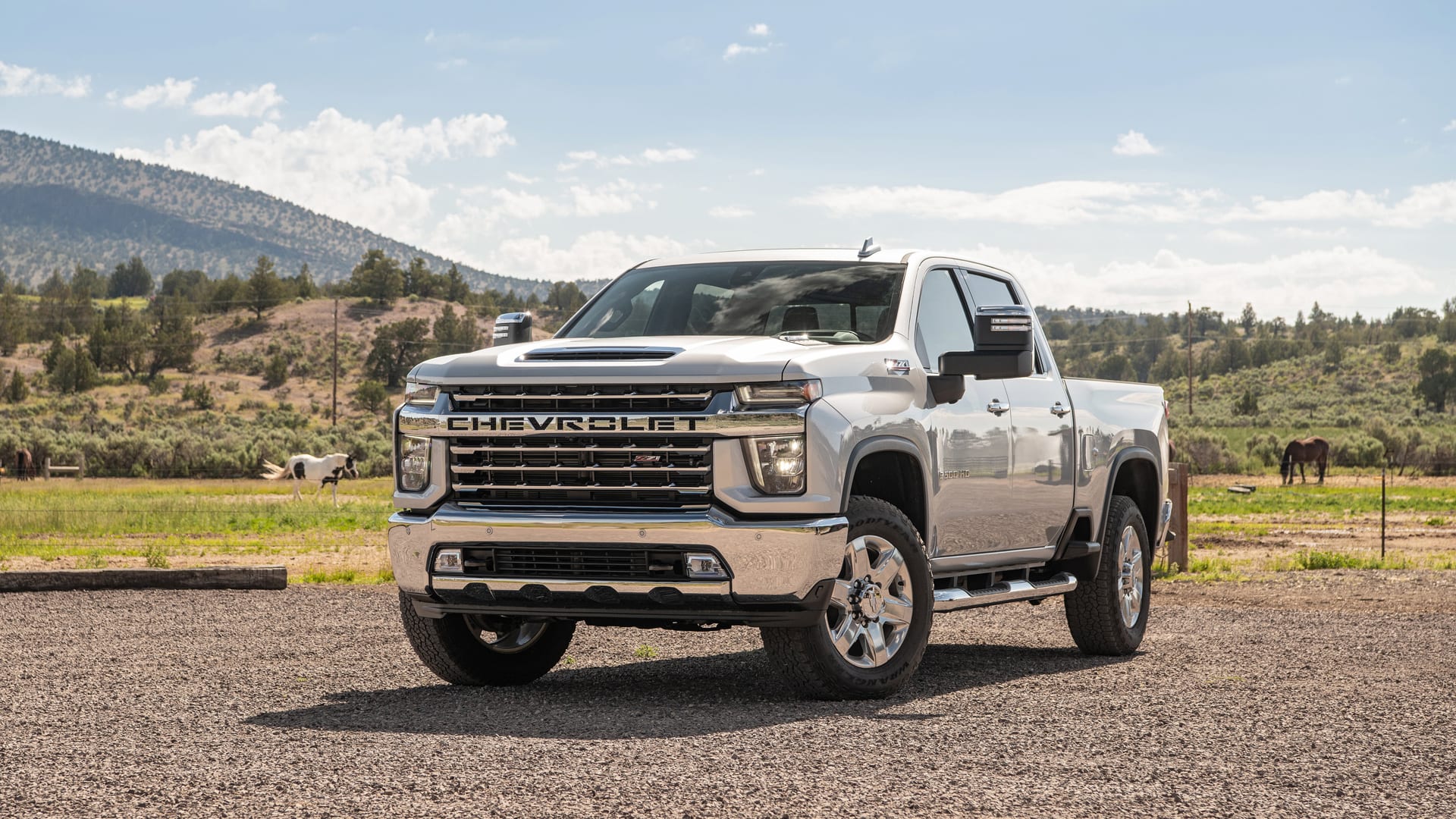 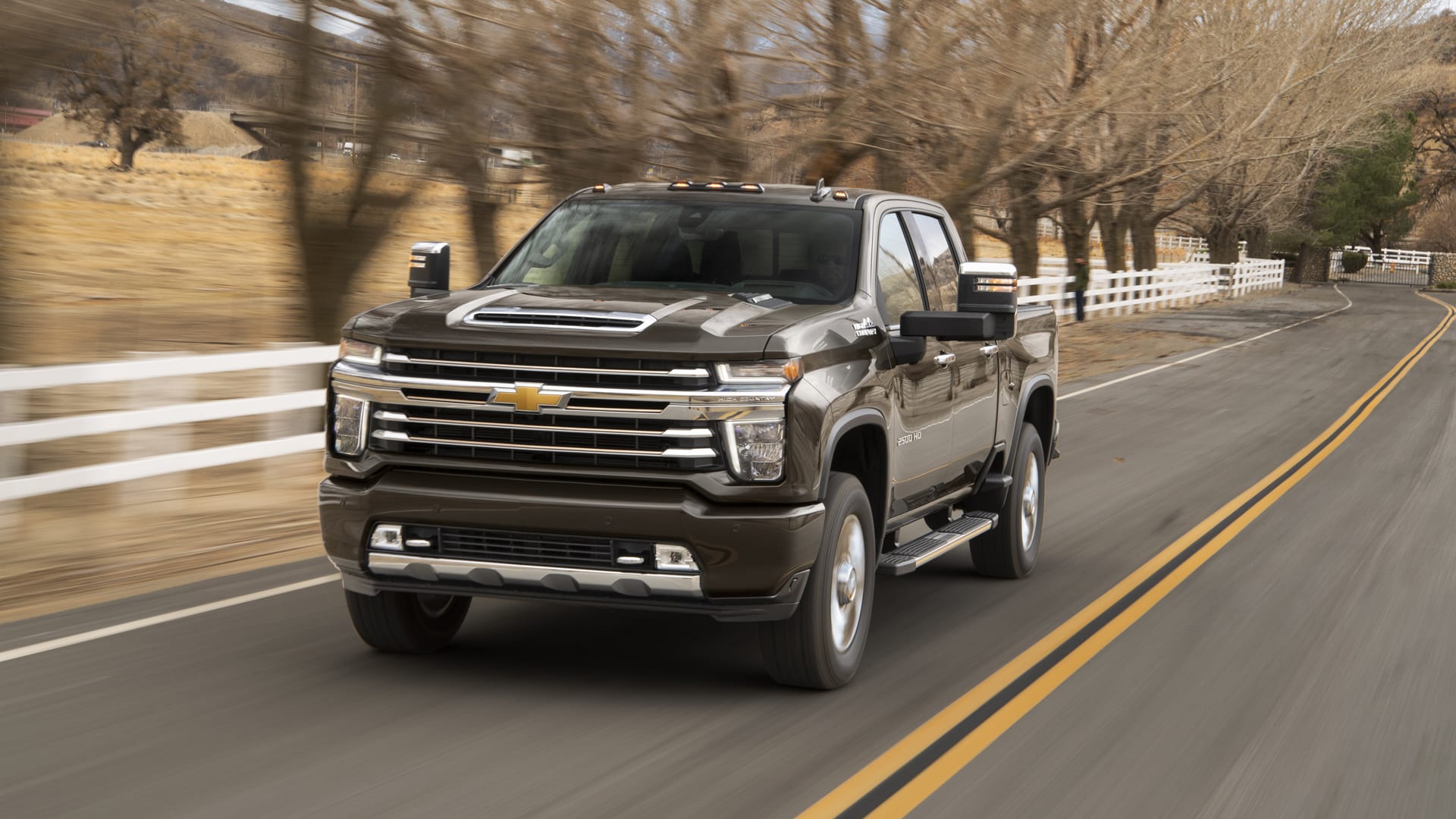 Now, as you’ve definitely noticed, every version of the 2020 Silverado HD gets all-new styling that’s controversial at best, ghastly at worst and different depending on trim. In any event, know that every body panel apart from the roof is now unique to the HD. The interior is pretty much shared, but more on that later, because as we’ve already noted, it’s capability that matters here.

To that end, the 2020 Silverado HD gets an enhanced version of Chevy’s boxed rail frame design, which has been beefed up to handle greater loads. It’s also been stretched in crew cab models an extra 5.2 inches for greater interior space. There are also larger and more robust front axles, while the prop shaft is 30% larger. The fifth wheel connection can also now be ordered directly from the factory, as opposed to relying on dealers to effectively dismantle the rear end of the truck, attach the fifth-wheel connection to the frame, and cut holes in the bed.

Within the frame is now the diesel DEF (diesel exhaust fluid) tank, relocated from underneath the hood, and now attached to a filler adjacent to the diesel one. An electronic DEF gauge has also been added to the instrument panel. Diesel owners should also appreciate the standard engine block heater and its outlet neatly integrated into the lower left bumper. You won’t see a 2020 Silverado HD with a plug hanging out of the grille.

The Silverado is also the first heavy-duty truck to offer an automatic mode for 4×4 models — much like an all-wheel drive system, it’ll send power to the front axle when the system detects rear wheel slippage. We found it works exactly as advertised. 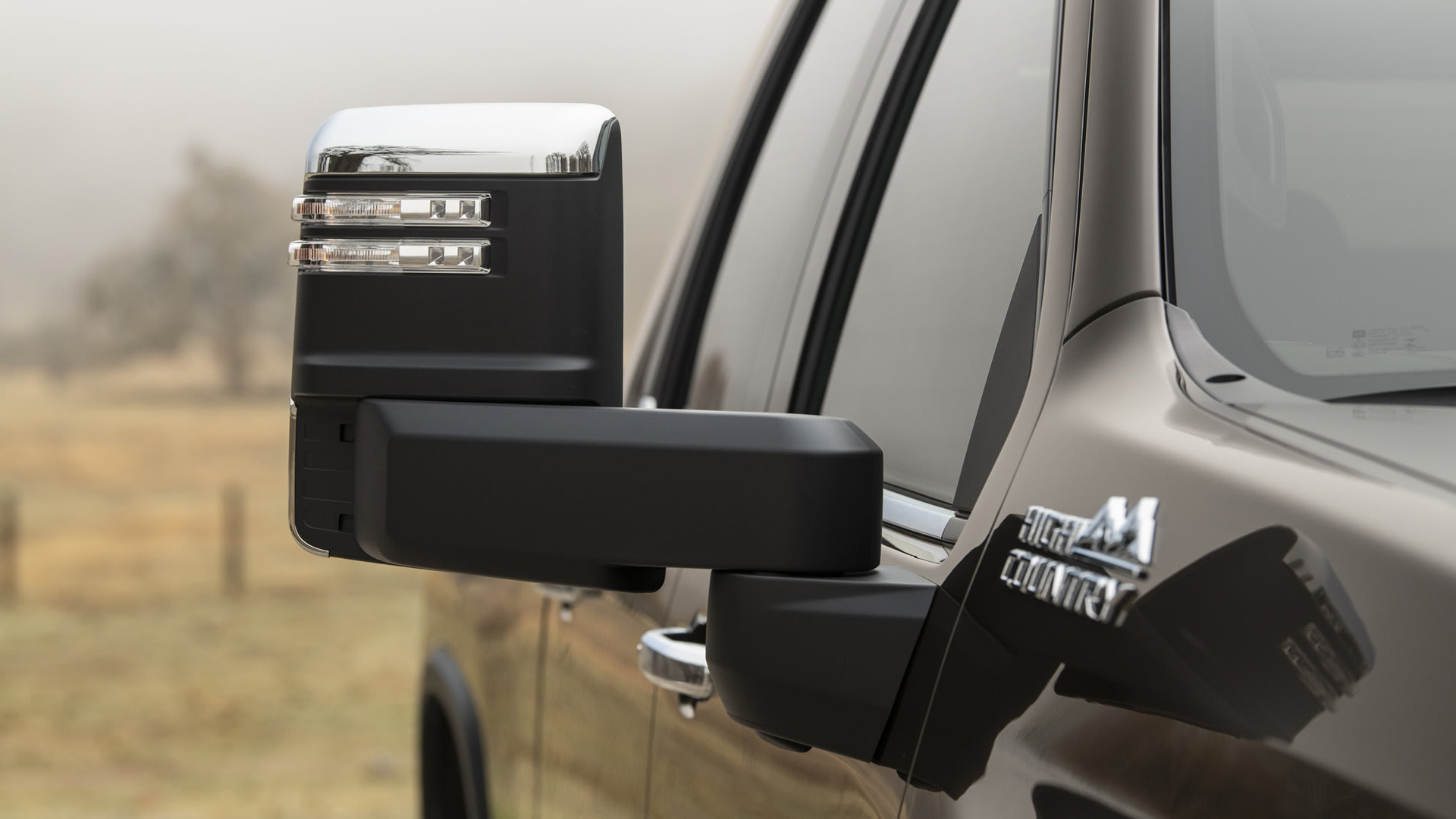 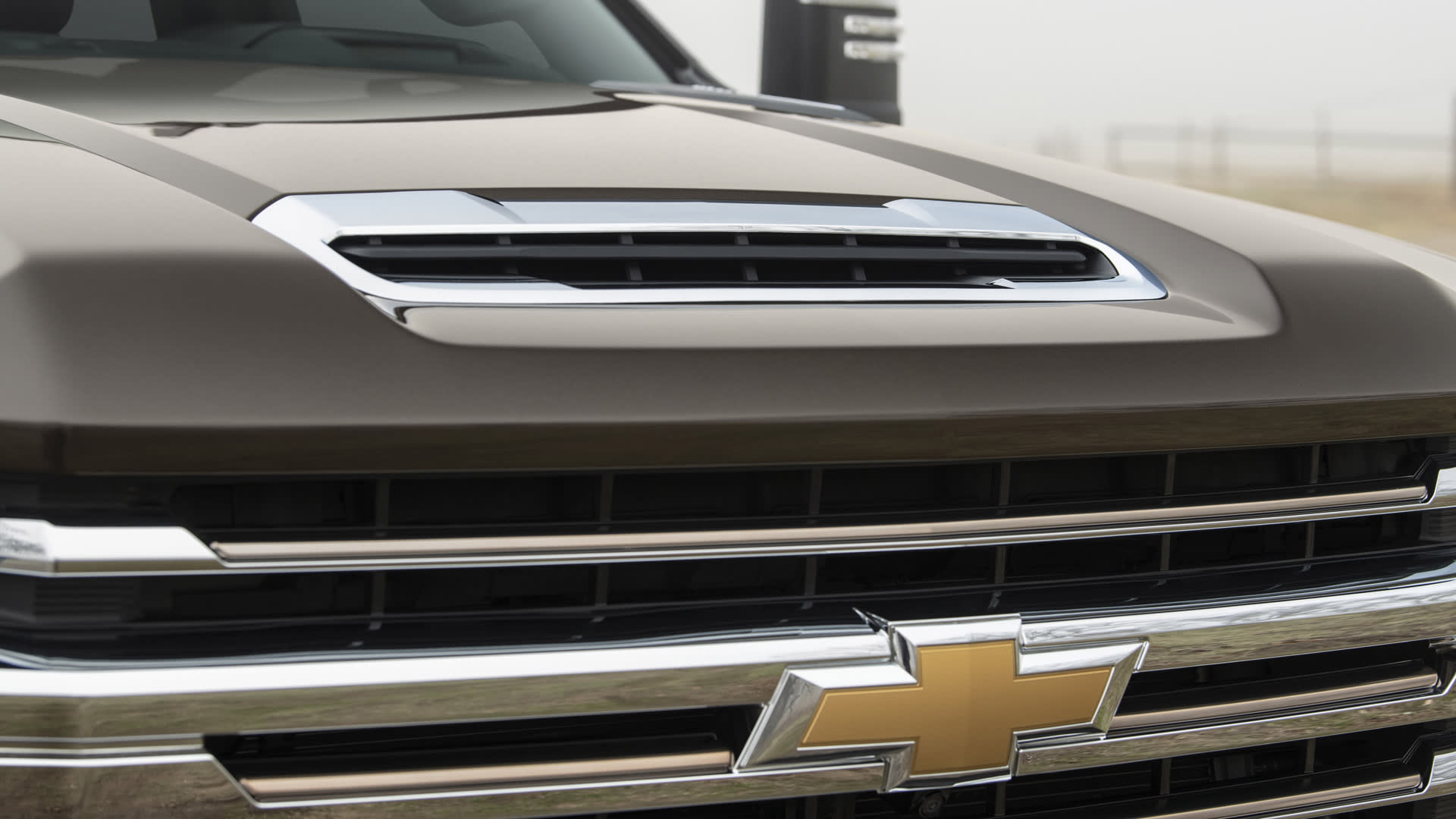 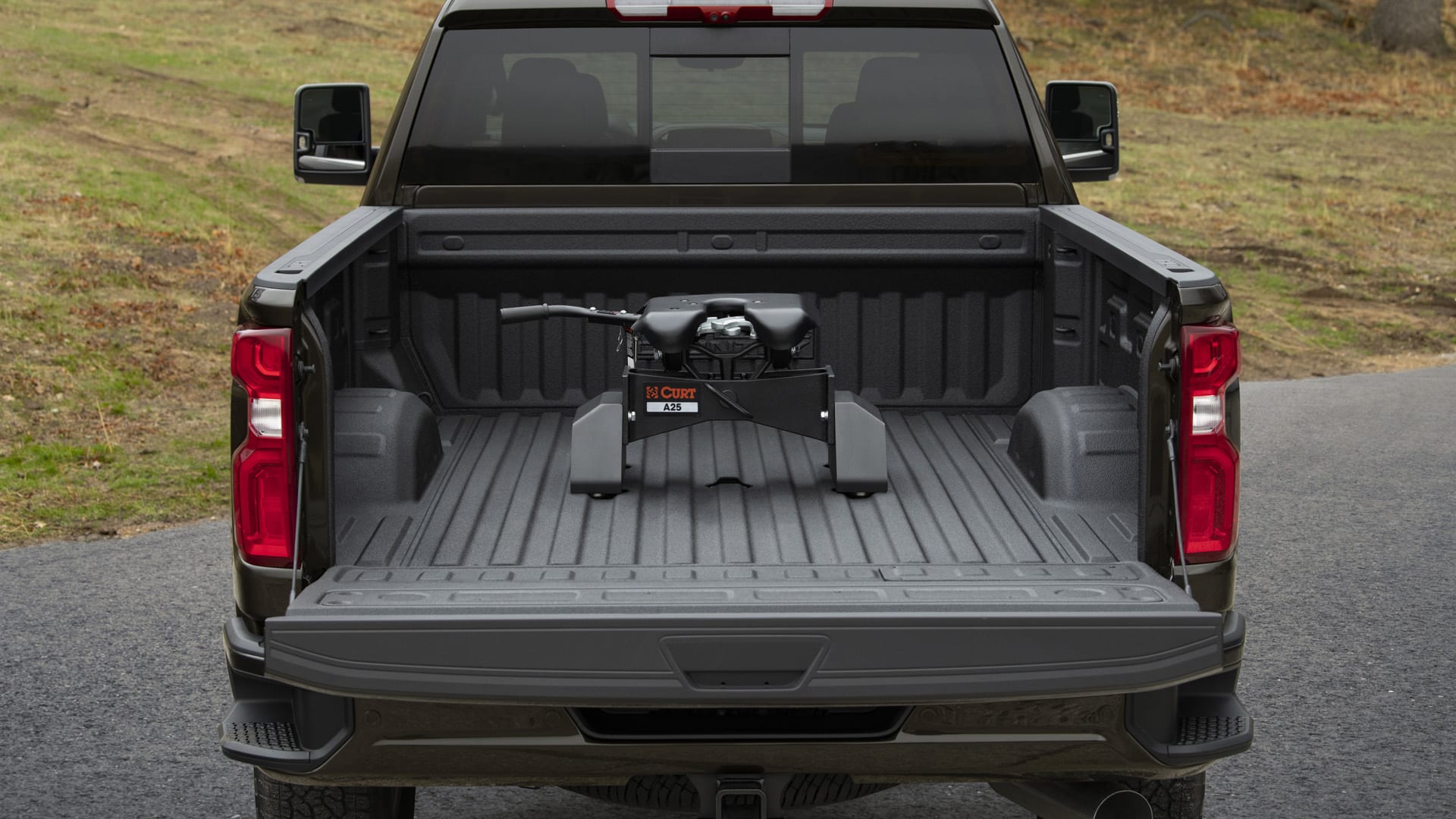 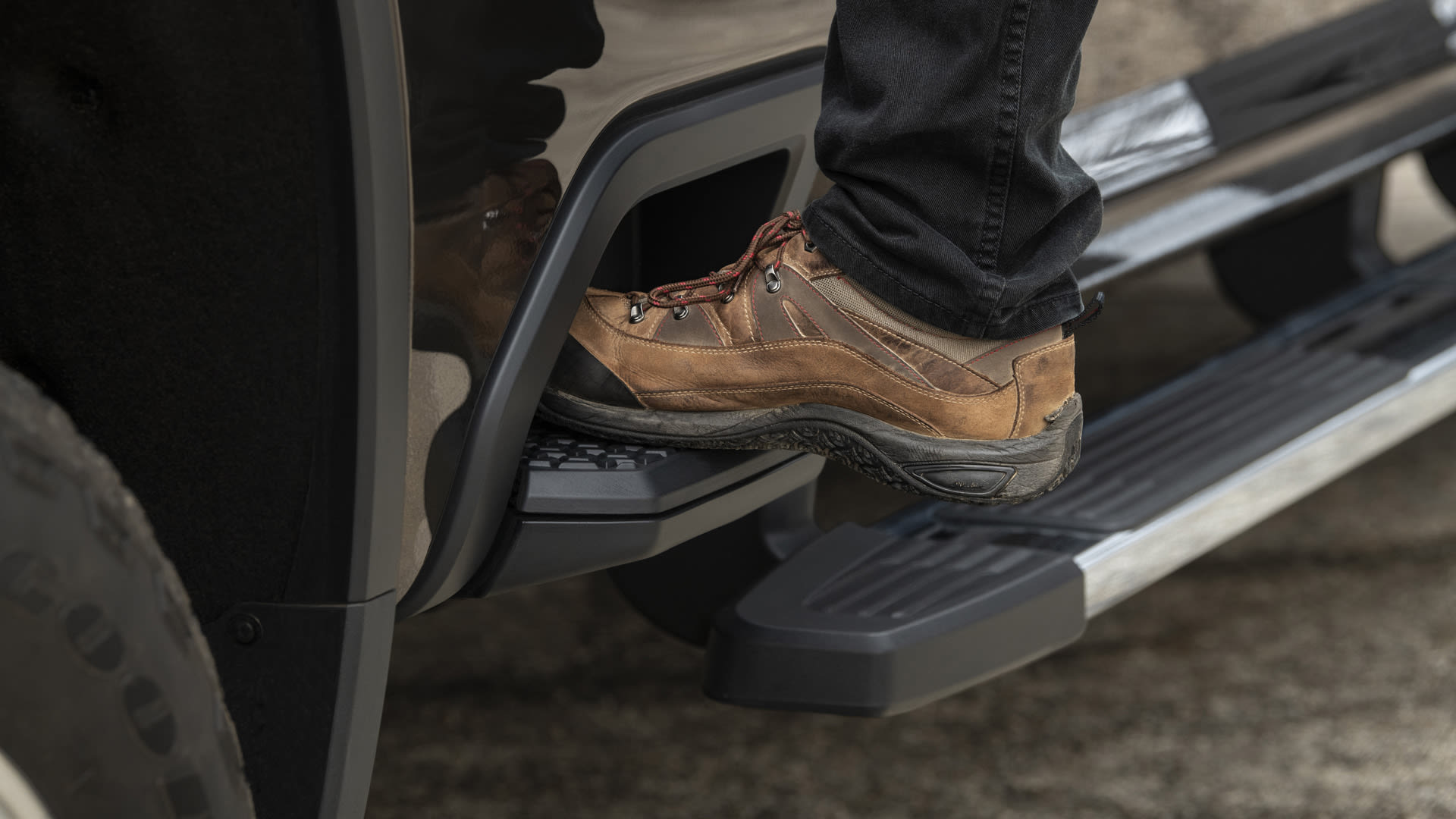 As for the diesel engine itself, the 6.6-liter V8 returns, producing the same 445 horsepower at 2,800 rpm and 910 pound-feet of torque at 1,600 rpm as before. Cooling has been improved thanks to a bigger fan and hood scoop, plus a new “after run” feature that automatically keeps the engine running (and eventually shuts itself off) after you’ve left the truck to properly cool it down after a particularly grueling job.

Crucially, the diesel also gets a new, standard 10-speed automatic transmission. Having so many gears reduces the gap between them, which is hugely beneficial for towing in terms of capability, efficiency and interior tranquility. There’s a reason big rigs can have 18-speed transmissions. By contrast, both the Ford and Ram heavy-duty pickups use six-speed transmissions. The exhaust brake function included on upper trims is another invaluable towing feature.

And really, this is just one example where Ram, and to a lesser degree Ford, requires you to check options boxes to achieve their maximum capacities. Chevrolet, on the other hand, is much closer to being one (big) size fits all. It’s possible the Ford or Ram may have a slightly higher maximum payload or towing capacity in certain model/cab/engine/axle/option combinations, but Chevy typically starts at a higher baseline of capability with a smaller range between minimum and maximum.

This is ultimately the most important takeaway in terms of payload and towing figures. That a regular cab Silverado 3500 dually delivers a best-in-class 35,500-pound maximum towing capacity is basically irrelevant. Choosing the right truck with the right combination depends on personal need, probably requires a spreadsheet, and usually comes down to only a few hundred pounds any way. 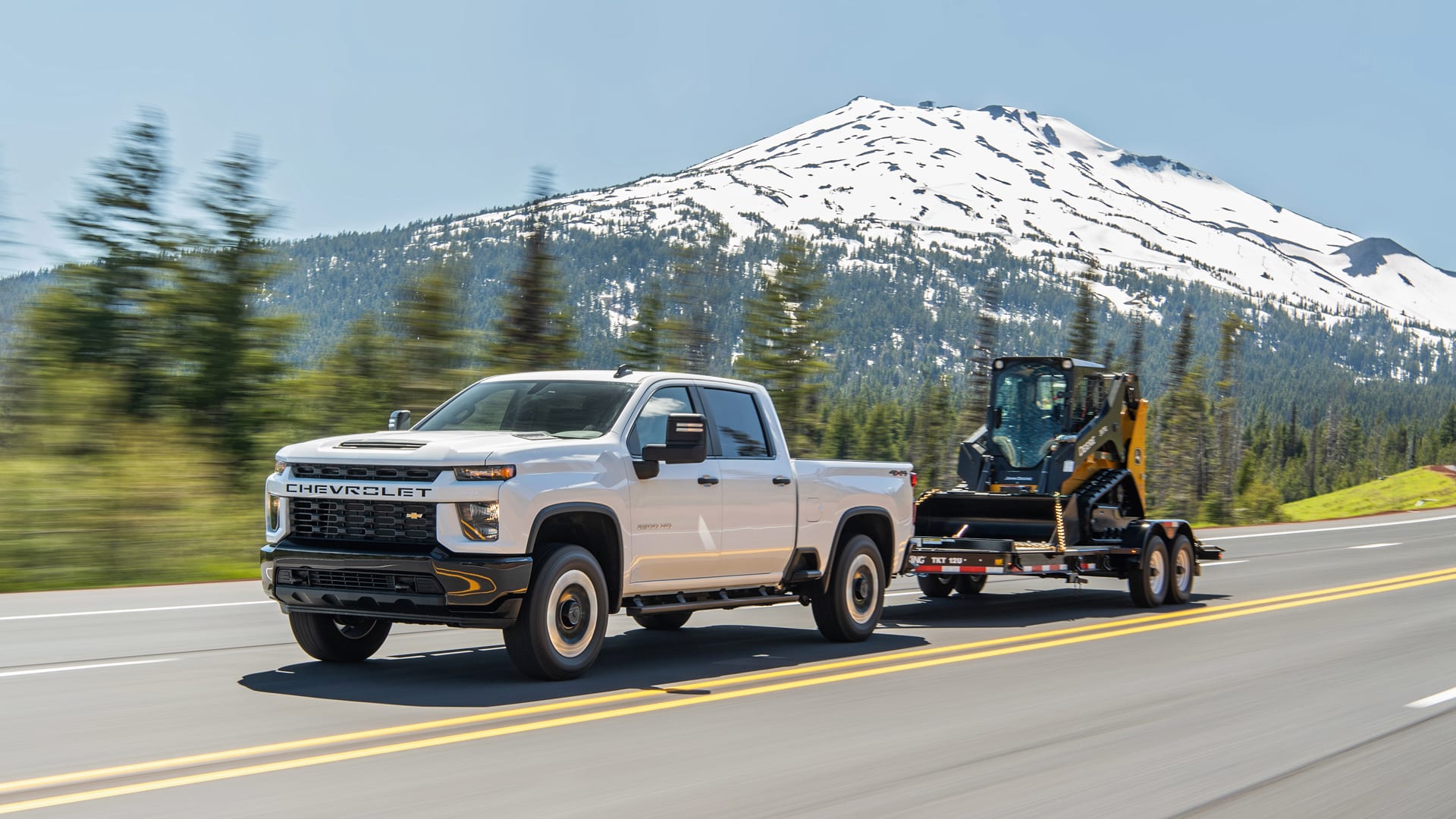 Now, should you really not need maximum capacity, the standard Silverado HD gasoline engine has been seriously upgraded. It’s an all-new 6.6-liter V8 with an iron block and aluminum heads featuring direct injection, variable valve timing and a higher compression ratio. It produces 401 hp and a whopping 464 lb-ft of torque thanks to a longer stroke. The old 6.0-liter managed only 360 hp and 380 lb-ft, which made it seriously outgunned by the gas Ford (6.2-liter V8, 385 hp, 430 lb-ft) and gas Ram (6.4-liter V8, 410 hp, 429 lb-ft). Basically, Chevy has gone from worst to first. It’s still attached to a six-speed automatic, though. So is Ford, but Ram counters with an eight-speed.

During our test drive in central Oregon around Mount Bachelor and the town of Bend, we found the gas engine to be merely capable. You just don’t get the genuinely quick acceleration when unladen as you’d find in a less powerful but substantially lighter 1500. That’s pretty much the heavy-duty norm, even if we suspect that a comparison drive with the Ram and Ford would indeed show a Chevy advantage.

Similarly, when hitched to a 12,000-pound combination of trailer and earth mover (pictured above), it capably got the job done, but there’s just no substitution for the diesel engine that produces nearly double the torque. We had so much more confidence driving a diesel-equipped High Country despite towing a trailer that was 2,000 pounds heavier. It’s therefore not surprising that the majority of HD buyers opt for the diesel engine despite a price tag that tops $9,000. 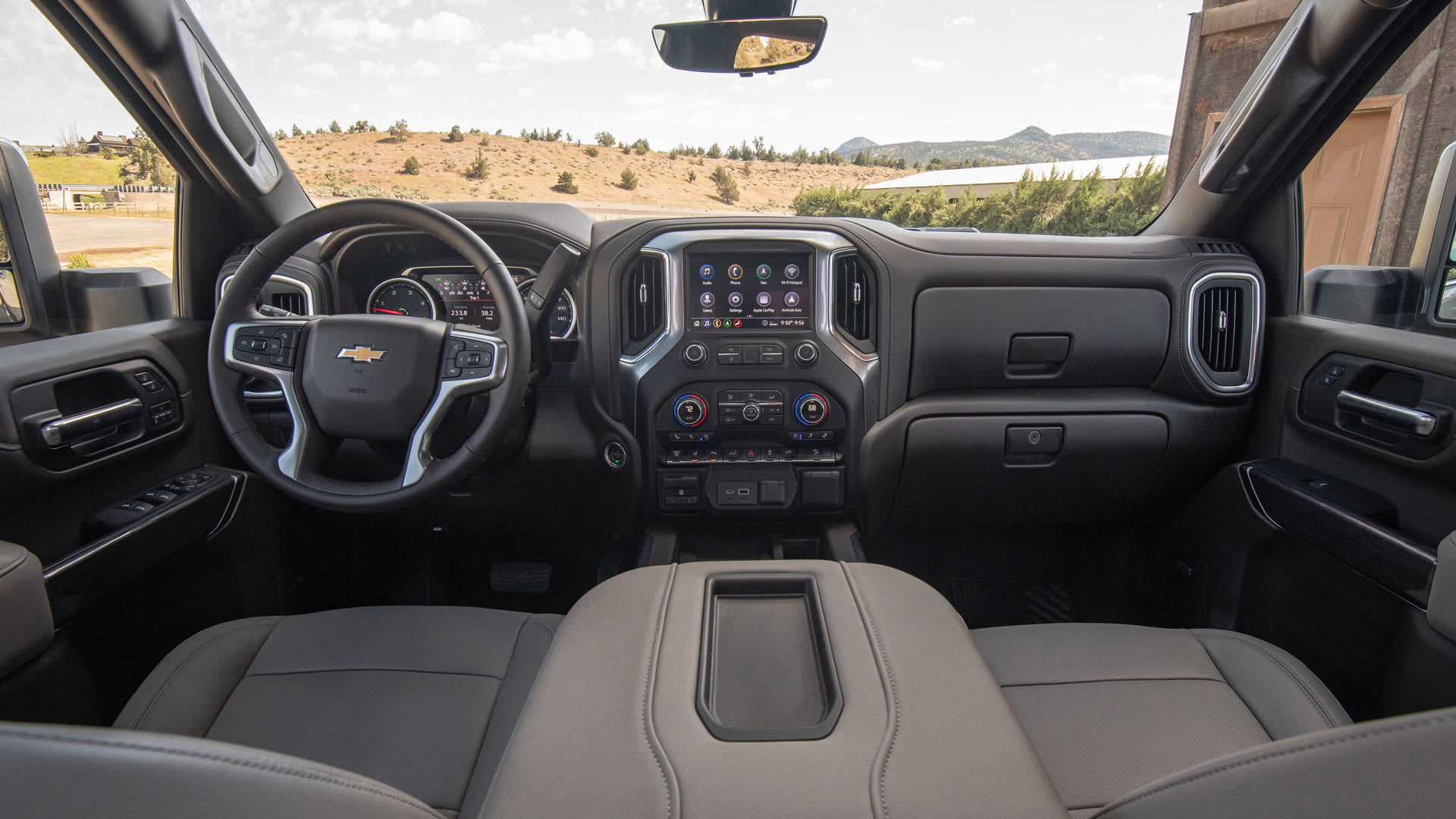 There’s more to consider than just the engine choice, however. The steering system depends on trim level, with the LTZ and High Country featuring an electro-mechanical system that keeps weighting consistent regardless of driving situation. Specifically, more effort is added in Tow/Haul mode, resulting in noticeably more precise and reassuring steering while towing. The Custom’s purely hydraulic steering, by contrast, becomes nebulous on center while towing and requires constant correction. Count this as a serious reason to consider an upper-trim Silverado — the Ram is purely hydraulic, while Ford offers a $1,000 adaptive steering ratio system on its upper trims.

Every Silverado HD has an independent front suspension (Ford does too, but Ram has a solid front axle) with a solid axle and leaf springs at the rear (same as every Ford and the Ram 3500, but the Ram 2500 has coil springs). The resulting ride is impressively well-damped and had us forgetting we were in a heavy duty truck when driving without a trailer (it was quite good with one as well). Maybe the Ram 2500 is better, but we’d need a real comparison drive to know for sure.

We would not need such a test to know that the interior has the same noncompetitive design and quality as the Silverado 1500. Yet, let’s reiterate who most frequently buys heavy-duty trucks and why. For businesses that buy a Work Truck or Custom, an ugly dash won’t matter a lick. Instead, they’re likely to notice faults that are shared with competitors: the steering wheel doesn’t telescope and there’s no driver seat height adjustment for shorter drivers who will struggle to see over the vast hood. Both are added on upper trim levels, but if they’re standard on a Chevy Cruze, they should be on a Silverado.

On the other end of the HD volume-selling spectrum, remember that even buyers of an LTZ or High Country are most concerned with capability. They’re likely towing something that costs far more than the truck itself, so why not throw down a few extra thousand for all the bells and whistles? That their High Country has only some extra “wood” and bronze plastic trim over an LT doesn’t really matter, nor will they care that the cab of a Ram 2500 Limited can be accurately described as luxurious. That said, if you find that a comparable Ram or Ford meets your needs, why would you want the high-dollar truck with the chintzy interior?

Well, there can actually be 15 reasons, as in the 15 different trailering camera views shown above that are available on the upper trim levels. With cameras mounted at the front, sides and tailgate, plus an auxiliary camera attached to the trailer and hardwired to the truck through a hitch-adjacent port, this is tech that makes a genuine difference for towing novices and experts alike. Digital lines make it easy to hitch up by yourself, and that integrated trailer cam allows you to actually see what’s going on behind the trailer. You can even see inside the trailer with a second remote camera. We found the old-fashioned convex tow mirrors to be just as effective as the side tow camera view, but nevertheless, more visibility is better while towing, period.

There’s other helpful trailering tech as well. A customizable checklist helps all those new RVers make sure everything is set up the way it should be. Another feature runs through all the various trailer lights while you’re standing outside watching to confirm they work. There’s also an ASA trailering app that allows you to monitor or control various functions inside the trailer such as the air conditioning or tank levels.

While the Ford and Ram offer some of these features, Chevrolet has more and it truly makes a difference — certainly more so than plastics quality. These are trucks intended for doing a job, and in this way, the Silverado HD makes it easier to do those jobs while also making it easier to buy and actually find the truck with the right capability. While a full comparison with a serious tow test would be needed to declare which truck is best for the most buyers, it is certainly clear that the Silverado HD is far more competitive than its 1500 sibling.