MUNICH, Germany — A battery-electric Mini SE? Haven’t we been here before? Well, yes: A decade ago, as part of its “i Project,” BMW conducted a worldwide field trial of some 750 lithium-ion battery equipped two-door Mini Coopers. It was launched at the 2008 L.A. Show, and the lithium-ion battery pack took up most of the space normally occupied by the rear seats. Nevertheless, interest in the 450 lease vehicles offered in the U.S. (at $850 a month) was strong, with more demand than cars available.

One result of the 2008-2011 trial was parent company BMW learned that the average owner of a two-door Mini drives about 25 miles a day, and the company is hoping the battery Mini will be an ideal (sub)urban-run-around for two- or three-car families. Now BMW is about to launch a production Mini EV (based on the two-door model, but with the full complement of four seats), which goes on sale at the end of the year. This will join the Mini Countryman All4 plug-in hybrid in the electrified Mini stable, but while the Countryman has an EV range of about 12 miles, this battery Mini will travel around 120 miles on a single charge.

The reason we can’t be too definite about the new Mini’s capabilities is that BMW isn’t allowed to “advertise” the car this far in front of its on-sale date. We caught up with the prototype model, mummified in camouflage tape, at an off-the-road driving event held at BMW’s Munich driving center on the former military air base of Fürstenfeldbruck, now known as Maisach.

The drivetrain is based on the middle model of BMW’s i3 range, the i3S, with its 135 kilowatt/181 horsepower motor and 94 amp-hour, 33 kilowatt hour battery. The battery is a 96-cell lithium-ion unit from Chinese supplier CATL instead of BMW’s previous supplier, Samsung, and it weights 441 pounds. Unlike the team-built, mainly carbon-fiber i3, the Mini is a standard three-door model that runs down the production line in Oxford, with a metal subframe that houses the electric motor, inverter, transformers, and control electronics so they can be slotted into place like a conventional driveline.

We can extrapolate a few things about the Mini from the BMW i3S. As well as its working range of 120 miles, the i3S has a top speed of 100 mph and will accelerate from 0-62 mph in 7.7 seconds. With over 360 pounds more to pull about, the 2,998-pound Mini EV will be slower, with less range, especially if used in cold conditions.

Understandably Mini is cagey about pricing but says it will sell at a “competitive price against the Cooper S automatic,” according to a spokesperson. 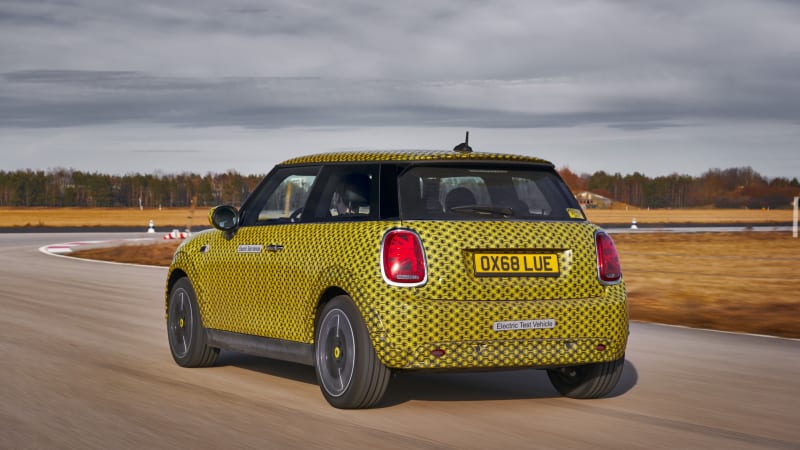 Recharging time is calculated at about 40 minutes for an 80 percent fill when connected to a 50 kilowatt D/C charger, three hours on an 11.2 kilowatt A/C charger and about 12 hours if you use a standard household supply.

From the outside, there’s little to differentiate the electron-powered Mini from a standard Cooper. Mini’s designers have even played with the fenders to hide the extra 0.8 inches of ground clearance that the battery version gets to protect its cells from road debris. There’s a blanked-in front grille and a rear valance without the hole for an exhaust pipe. Even the name, Mini Cooper SE, gives little indication of what lies under the hood.

Being a former airfield, Maisach has huge flat concrete roads — big on expansion joints but short on urban road characteristics. Sit inside, and the cabin is pretty much pure Mini: a great driving position, bucket-style seats, and ‘My-First-Car’ big switches and dials. We were assured that the battery conversion hasn’t changed the cabin or trunk dimensions one jot. 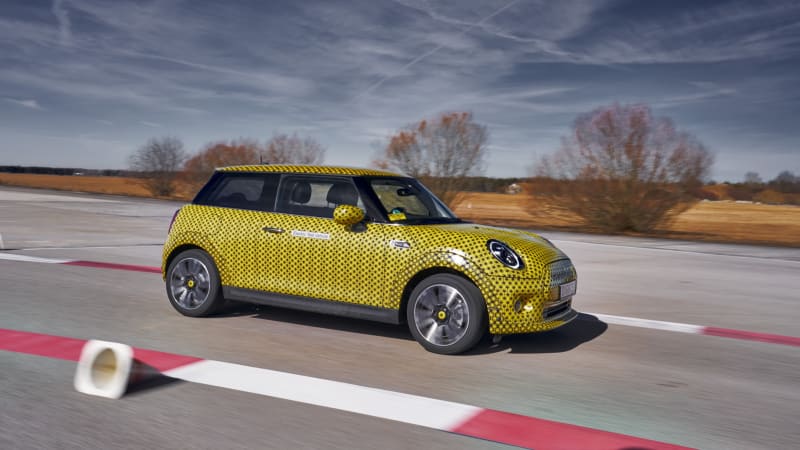 A center console switch energizes the systems with a polyphonic swoosh and you press the throttle and go. Like the i3, the Mini’s throttle pedal has a two-stage regeneration braking function. Lift off and the car slows and eventually stops; the first setting has a maximum slowing power of 0.11g, and the fiercer setting stops at 0.19 g (the i3 equivalent has a more gentle maximum of 0.16g ). This one-pedal operation is controversial, and there’s no way of turning it off as that setting would reduce the published EV range. You eventually get used to it, but many drivers don’t like it.

With maximum torque from almost zero revs, electric cars move briskly from stoplights, and Mini is no exception. That fast takeoff often comes at the cost of copious wheelspin, although Mini is rock steady in that respect even when you floor the throttle on a specially wetted track. This is because the traction is handled by the motor’s electronic control unit rather than a separate dynamic stability control unit. “It’s faster, and an electric motor is easier to control,” said a spokesperson. For stability control, however, the brakes are still used.

The Mini’s typically lively steering feel is retained, and with the batteries and motor mounted low in the frame, body roll is well-controlled. There is a weird, slightly laggardly response to the wheel, however. Once the nose has started to yaw, the front wants to push wide. At this point the Mini requires all the formidable grip from its 205/45/R17 Pirelli P Zero tires to keep to the prescribed line. 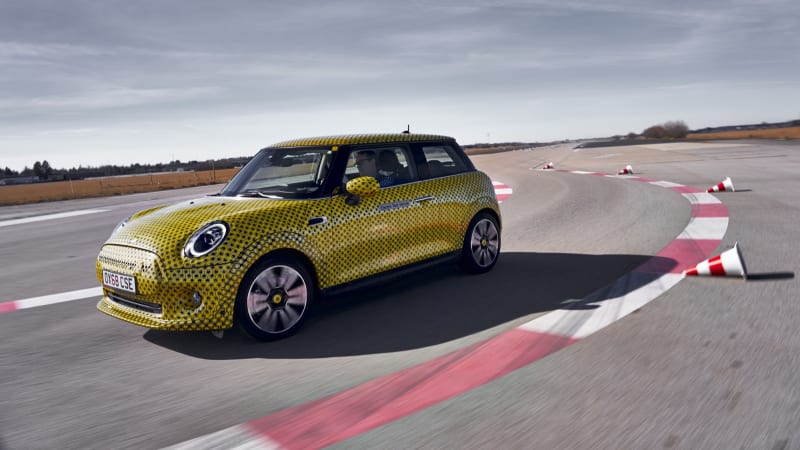 Compared to a standard Cooper S auto, the battery version weighs 143 pounds more, and so a bumpy ride can be expected, but isn’t bad at all. BMW has stiffened the front damper mounts and altered the damper and spring characteristics. For the most part, this volt-powered Mini soaks up undulations and vibrations, although the alternative 16-inch wheels and tires might be a better choice for lumpy New York City roads.

This could never be a full replacement for a family car, but for well-heeled families living in urban sprawl, it could become first choice for local trips. On this evidence, the all-electric Mini is fun, fast, and with range enough to allow you run it all day then park in the drive and recharge overnight. At a time when most of the world passenger cars are going at least partially electric, this Mini looks like one of the more appealing options.