Grab one of these Indy 500 Pace Cars for sale

Grab one of these Indy 500 Pace Cars for sale

For motorsports fans, Memorial Day Weekend can mean only one thing: the Indianapolis 500. This year, though, the Indy 500 will run instead in August, due to the coronavirus. Kicking off with the most famous words in motorsports, “Drivers, start your engines!” the racers take to the track behind the pace car. For years now, the manufacturers of the selected pace car have capitalized on that honor with a run of Indy Pace Car replicas. Owning one is the closest most fans can get to taking their own turn on the Brickyard.

We’re feeling nostalgic for the Indy 500, however, so we prepared this roundup of Indy Pace Car replicas that happen to be for sale right now. Although the Chevrolet Corvette has most often paced the race — and will do so again in August — there has been some pretty surprising variety among pace cars, including those you can park in your own paddock. Which of these would you choose? 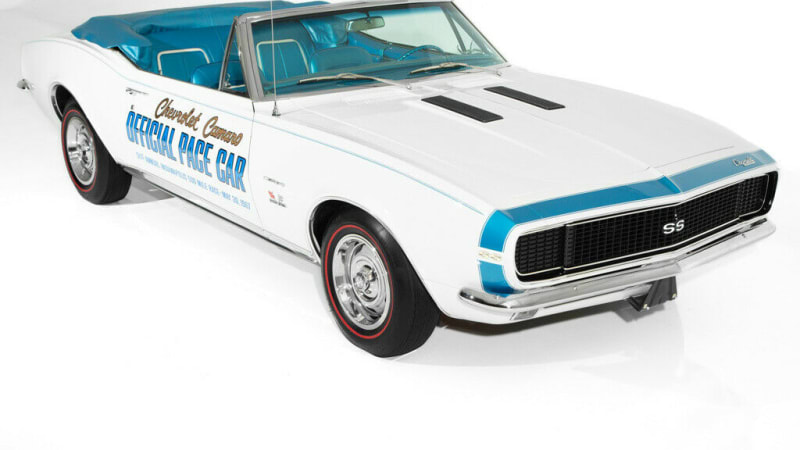 1967 Chevrolet Camaro convertible: The oldest Indy Pace Car we could find on the market now is this 1967 Chevy Camaro convertible, said to be one of just 100 Indy Pace Car replicas produced to commemorate that year’s race. Based on the RS/SS, the Pace Car convertible features hidden headlights, Rally wheels with redline tires, a blue front stripe, power steering and power front disc brakes. Under the hood is a numbers-matching 396 V8 paired with a Turbo 400 automatic and a 12-bolt rear axle with a 3.31:1 final drive. White with a white top over a bright blue interior with bucket seats and a console, this Camaro Indy Pace Car looks sharp and is claimed to be fully restored — as well it should with an asking price of $89,900. Find it here on eBay Motors. 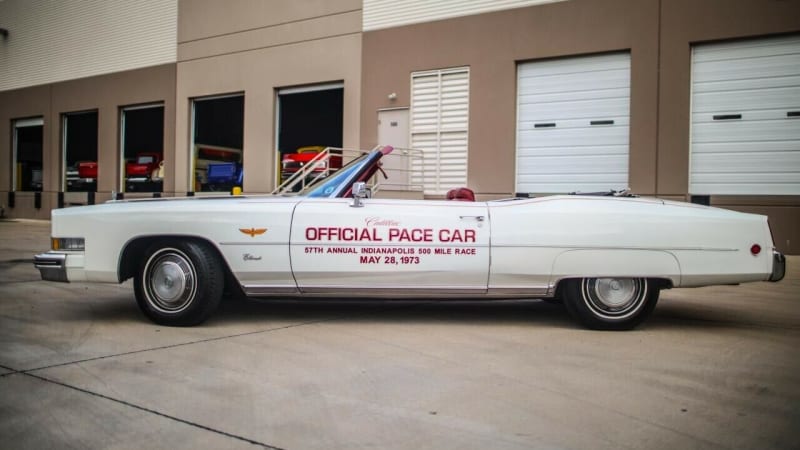 1973 Cadillac Eldorado convertible: One gets the sense that a droptop was long seen as a key requirement of pace-car duty, which must have been cause for concern in the early 1970s, when convertibles from American automakers were fast disappearing. How else to explain the Cadillac Eldorado as the Indy 500 pace car for 1973? Well, there’s also the factor of its 500-cubic-inch V8.

This Eldorado Official Pace Car convertible, offered here on eBay, is on consignment at Gateway Classic Cars in their Dallas location (fittingly). Only 566 Eldorado pace car replicas were built, all finished in white over red leather. This car’s white top could stand to be replaced, although you’re only going to drive it with the top stowed anyway. No garage queen, this Caddy has 73k miles. Apparently, a showboat Caddy convertible is just another grocery-getter in Texas. Turn your everyday adventures into a lap of the Brickyard for just $25,500. 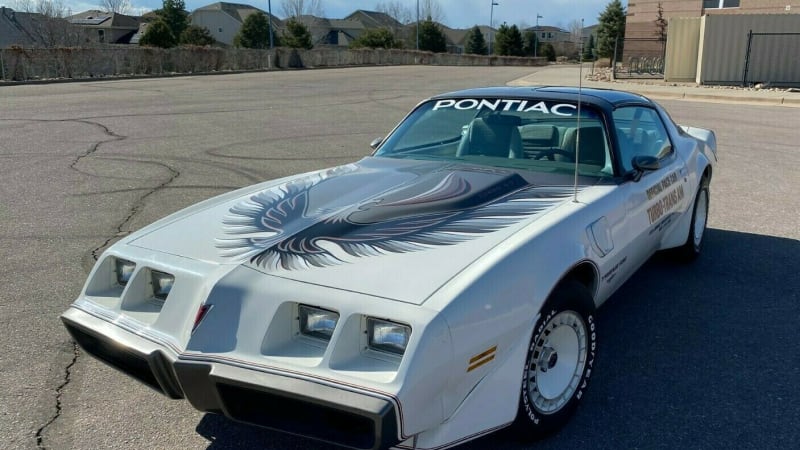 1980 Pontiac Trans Am: If you had polled race fans in 1977 asking what car should pace the Indy 500, it’s a safe bet they would have chosen the Pontiac Trans Am (instead it was the Oldsmobile Delta 88). Trans Am mania was in full swing that year, thanks to the car’s star turn in “Smokey and the Bandit.” But the top-dog Firebird was not afforded the honor until 1980.

Pontiac made the most of it, however, cranking out 5,700 Indy Pace Car replicas (or roughly 10 percent of the total Trans Ams). All were two-tone white and gray with white-painted turbo-cast alloy wheels, silver-finished T-tops, oyster-gray velour seats, and of course, the massive Turbo Trans Am hood bird decal. Unfortunately, 1980 was the year the Trans Am lost its 400ci V8 in favor of a turbocharged 301ci V8. This 22,000-mile example is said to be largely original and is on offer by a private seller on eBay at a buy-it-now price of $27,500. 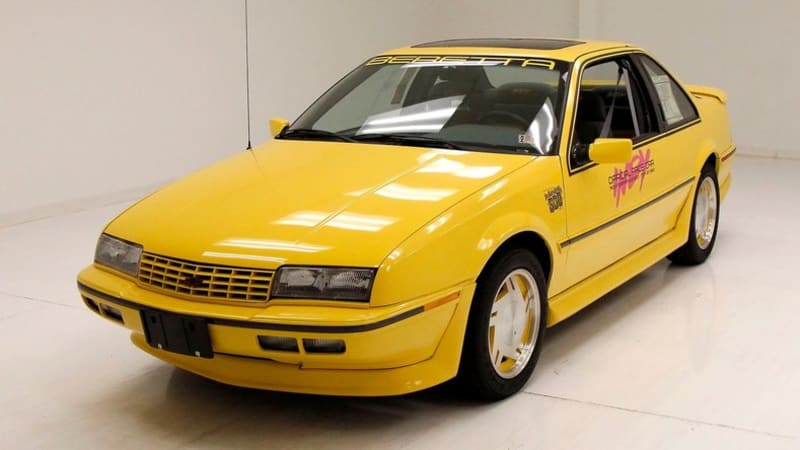 1990 Chevrolet Beretta: The Chevy Beretta probably doesn’t jump immediately to mind when one thinks of Indy Pace Cars, and indeed, Chevy’s mildly sporty coupe was a one-time wonder leading the field at the 500. Chevy did not let the opportunity go to waste, however, and build a run of 1,500 Beretta Indy Pace Car replicas. Whereas the actual pace car had its roof chopped off, the replicas were regular Beretta coupes. And whereas the real pace car was metallic orange, the replicas were offered in yellow and turquoise, with pink squiggle graphics (rad!).

This yellow example for sale on eBay presents as an in-the-wrapper example with just 22 miles on the odometer — although the consignor notes that the odometer was not working when they received the car. Whatever the mileage, this Beretta appears as new and still wears its original window sticker. Equipped with a 3.1-liter V6 and a four-speed automatic, it’s amazing this machine was able to lead the field. Chevy made it look fast, though, with a front spoiler, lower-body skirts, and a decklid spoiler. There’s also a body-color grille and body-color inserts in the alloy wheels. And check out the yellow stripe and “Indy” script on the cloth bucket seats. At this writing, bidding stands at $8,700. 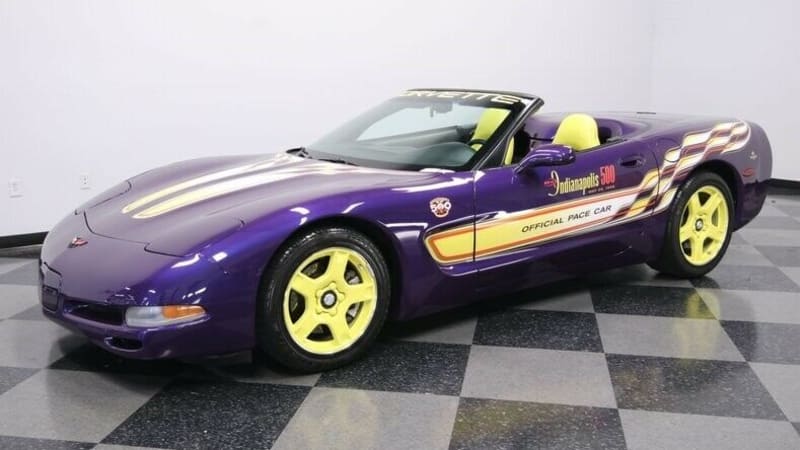 1998 Chevrolet Corvette convertible: If the previous Indy pace cars don’t have enough visual impact for you, allow us to direct your attention to this ’98 Corvette Indy Pace Car. The ’98 Corvette certainly boasts the most retina-searing livery of any Indy pace car, ever. It’s claimed that 1,163 were built for public sale (this is #345), and all wore a base color of Radar Purple, which formed a suitably festive base for the yellow, white, and black graphics. Neon yellow is used for the wheels, and the vibrant hue appears again on the seats and is splashed around the engine compartment as well.

This example, found here on eBay Motors, has just over 50,000 miles, and it’s a good bet that it didn’t pass a single one of them without drawing stares. It’s powered by a 5.7-liter LS1 V8 backed by a four-speed automatic. Asking price for this colorful piece is $19,995.