When we humans encounter something new in life, we tend to judge it based on previous life experiences. We benchmark where we are against where we’ve been.

My frame of reference, when settling in to drive a 2020 Ford Mustang EcoBoost Convertible with the High Performance Package, is my own 2007 Mustang GT convertible. That is, four-cylinder vs. V8.

My car is nose-heavy. Its clutch is drudgery. Its shifter isn’t all that smooth. Looking out over a big fake cowl, you feel less like you’re driving a car than like your seat is tethered behind the 4.6-liter V8. You’re the jockey of a racing surrey attached to the business end of a horse. Then there’s that solid rear axle. The car, with 300 horsepower and 320 pound-feet of torque, is no muscle car by today’s standards, but it drives with the retro sensibilities of one. But when the top’s down for a summer cruise and the V8 is singing baritone in your ear, it’ll make you smile.

When the Mustang 2.3 EcoBoost came out in 2015, I could understand those who said, hey, this doesn’t sound like a Mustang. Never mind that the EcoBoost’s performance was sufficiently Mustang — capable of 0-to-60 in 5.1 seconds and generating more horsepower and more torque than my V8, from half the displacement. The EcoBoost was great to drive, just a little odd to listen to.

Maybe Ford listened to that feedback. Or it pitied us, having taken the Focus RS away. Last year, it introduced the EcoBoost High Performance Package. And while the car still doesn’t sound like a V8, it’s pretty righteous. No one would complain to hear these sounds coming out of a Golf R or a Subaru WRX STi or, of course, a Focus RS with the same engine. Besides, we’re right around the corner from getting a car called Mustang that won’t make any sound at all.

The $4,995 High Performance Package, or HPP, gives the 2.3-liter a boost of 20 horsepower, to 330, by adding a bigger twin-scroll turbocharger and tweaking engine calibration. (Though that’s still 20 less than the Focus RS.) Torque remains the same at 350 pound-feet, but it’s through a broader range, with at least 90% of peak available from 3,000 rpm through redline. (All of this is accomplished on premium gas.) There’s a larger radiator and larger brake rotors with four-piston calipers, a limited-slip differential, 19-inch black-accent aluminum wheels, aluminum dash with oil-pressure and boost gauges, the front splitter and belly pan from the GT Performance Package, rear wing, bigger rear sway bar, and a lot of chassis tuning. The package includes other small bits, including hood tape accent stripes I’d prefer to delete; the traditional racing stripes, or nothing at all, would be preferable. The design of the car is less daring than the Camaro, but more practical. 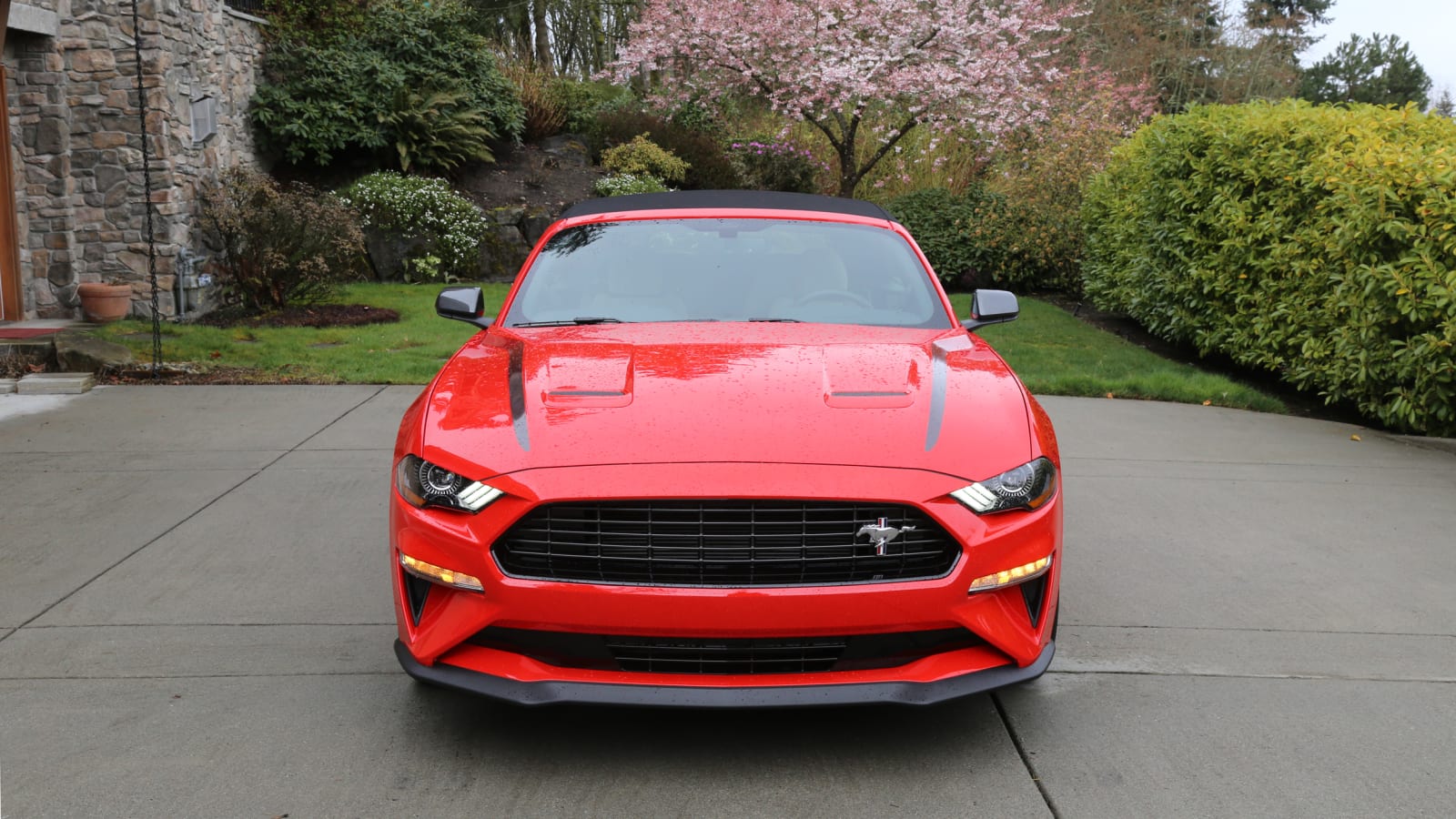 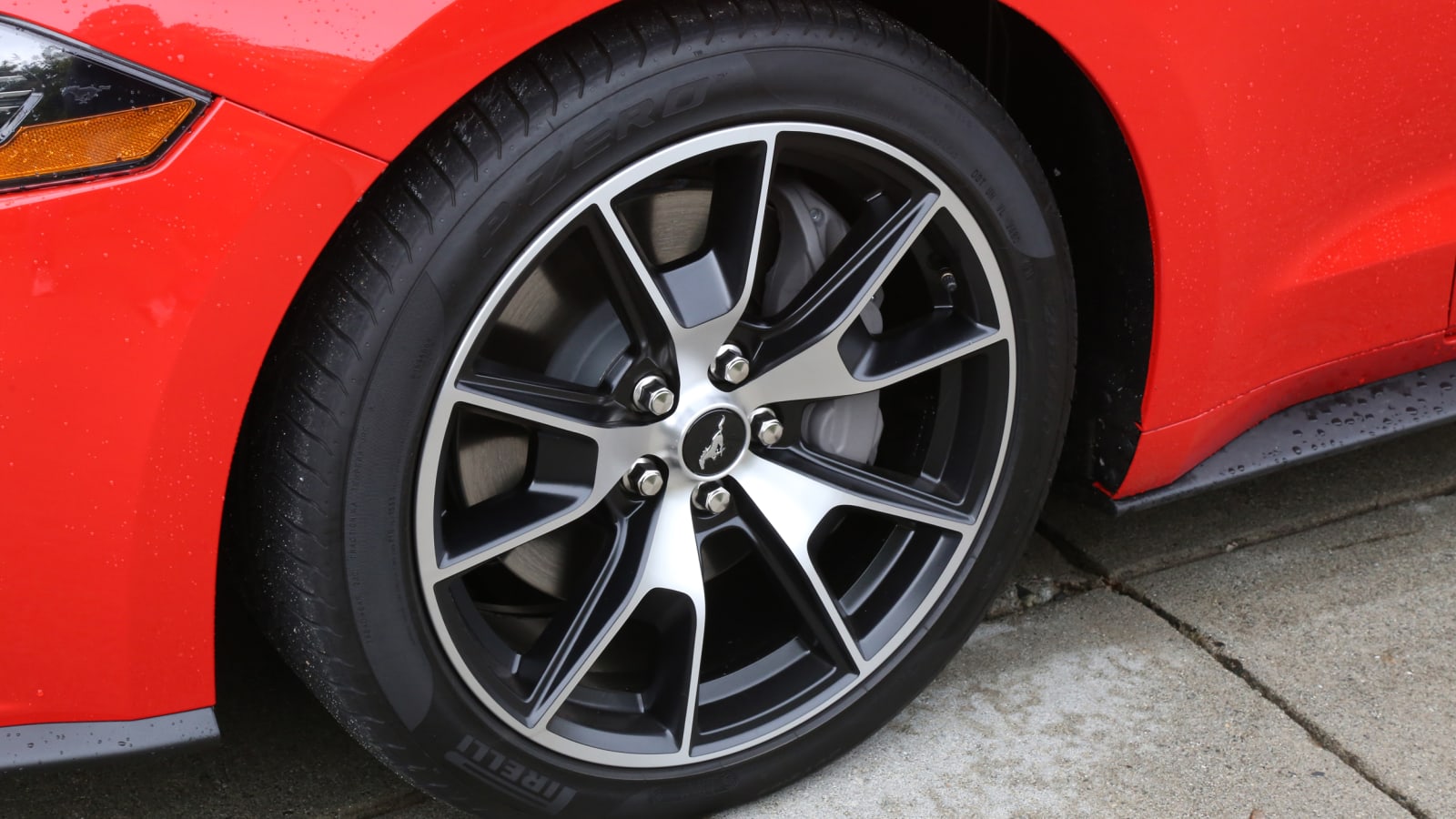 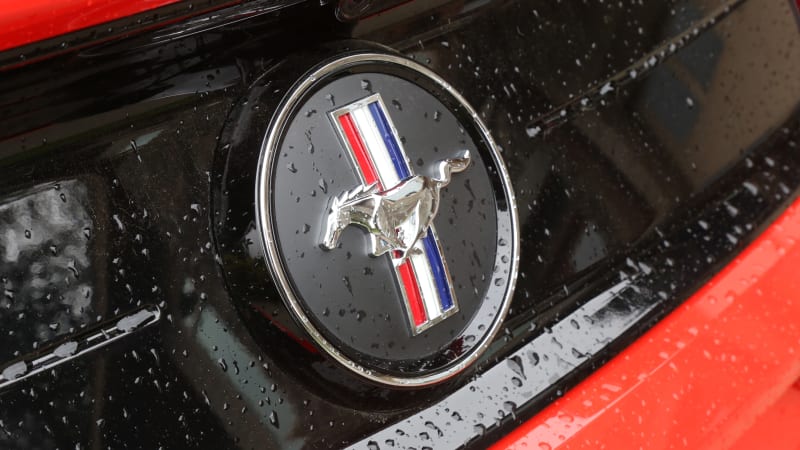 Finally, the exciting soundtrack comes courtesy of active valve performance exhaust with quad tips. This car is bristling with tailpipes.

The new hardware and software make the already hearty EcoBoost into the most formidable American four-cylinder, and lower Ford’s stated 0-to-60 time to 4.5 seconds. Which, when you drive it, seems plausible. The EcoBoost HPP has available the same 10-speed automatic as other Mustangs, or you can go with the nifty six-speed manual. It clicks through gears in a pleasing way, and the deft clutch is a vast improvement over the one-leg workout you get driving my old GT. The manual makes this car so much fun.

And although the High Performance Package can be added to both coupe and convertible, only hard tops can be equipped with the optional EcoBoost Handling package that enhances the HPP with different 19-inch wheels, Pirelli summer tires, upgraded brakes, a Torsen LSD and the MagneRide magnetically controlled dampers. Among all that, only MagneRide is available on the convertible, but more on that in a moment. 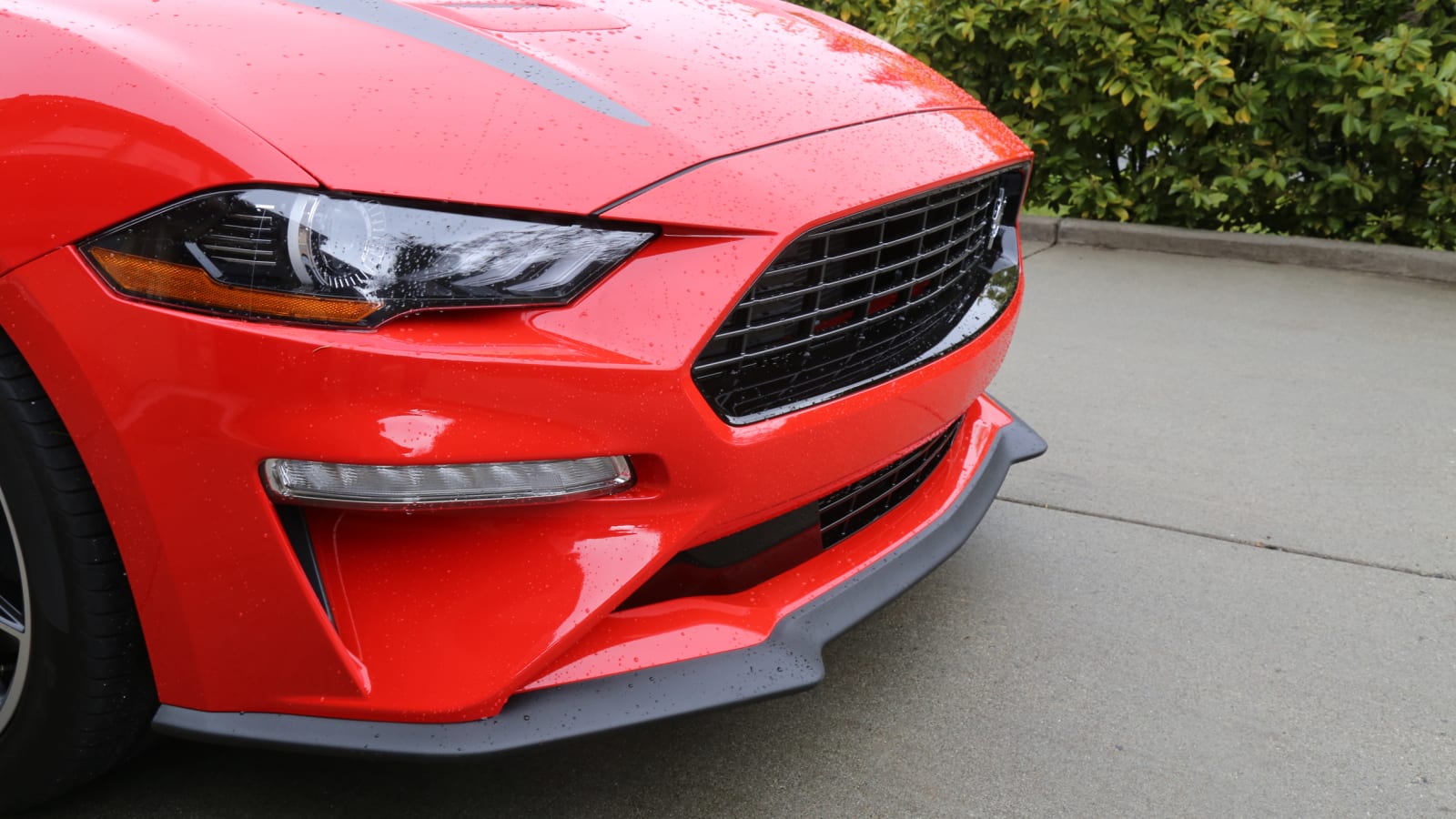 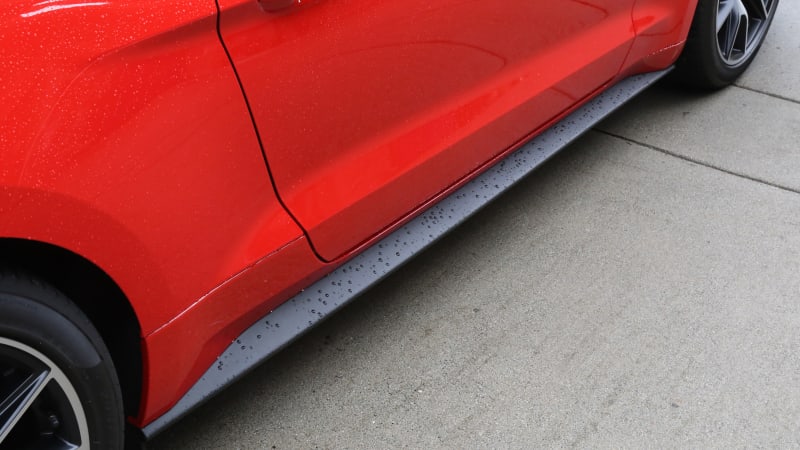 Driving the Ecoboost HPP is a vastly different experience than driving its older cousin. The top unfastens with one central handle, drops smoothly (though apparently not at even the lowest of speed), and doesn’t rob trunk space. Easing the clutch, you feel every detail as you feather the car out of its parking space.

One of the great things about driving a convertible is how much more alive all your senses are. You see things you wouldn’t see in a hardtop, nothing’s hidden. The sun welcomes you onto the road and gets the Vitamin D flowing. You’re in touch with the shifter and clutch and the revs. You smell all kinds of aromas — flowers, bakeries, occasionally something dead in a ditch. But the point is, you’re engaged in a way you never are in a closed car. In this Mustang, as you pull away you first hear the sticky Pirelli P-Zeroes suctioning the pavement and picking up tiny bits of gravel. But quickly, that’s eclipsed by the engine. The note gets more raucous when you select Sport drive mode.

It sounds more nasal at the tailpipes here than it does behind the wheel:

During the coronavirus lockdown, we took a socially distanced Sunday drive through country two-lanes that rose, fell and twisted past hobby farms, dairy land and suburban incursions. We didn’t go fast, it was just a relaxing grand tour, enjoying the rhythm of shifting, hearing the engine agreeably crest a hill, smiling through the burbling, popping overrun as we backed down. The wind noise was barely noticeable, or maybe I was enjoying the engine too much to notice.

Even without the EcoBoost Handling Package, the car handles sharply thanks to the HPP chassis work it does have — it feels eager and balanced and nimble. The ride is firm but not harsh or jouncy. The EcoBoost HPP convertible with the manual at 3,758 pounds is actually only 133 pounds less than an equivalent V8, but all of that must come off the nose, and it feels much lighter. Weirdly, my old GT is lighter than the EcoBoost, but you’d swear it was the other way around.

The Ford Mustang 2.3 EcoBoost HPP, with the $2,000 Equipment Group A that adds nine-speaker stereo, drive modes, remote start, remote sensing, Sync 3, and dual-zone climate, has an MSRP of $38,880 including the $1,195 destination charge. But if I were buying, I’d step up to the EcoBoost Premium, even though it starts out $5,000 pricier, and here’s why. For one thing, this is how you get the MagneRide suspension, which should not only improve handling but the ride quality as well – not that I had a problem with either. 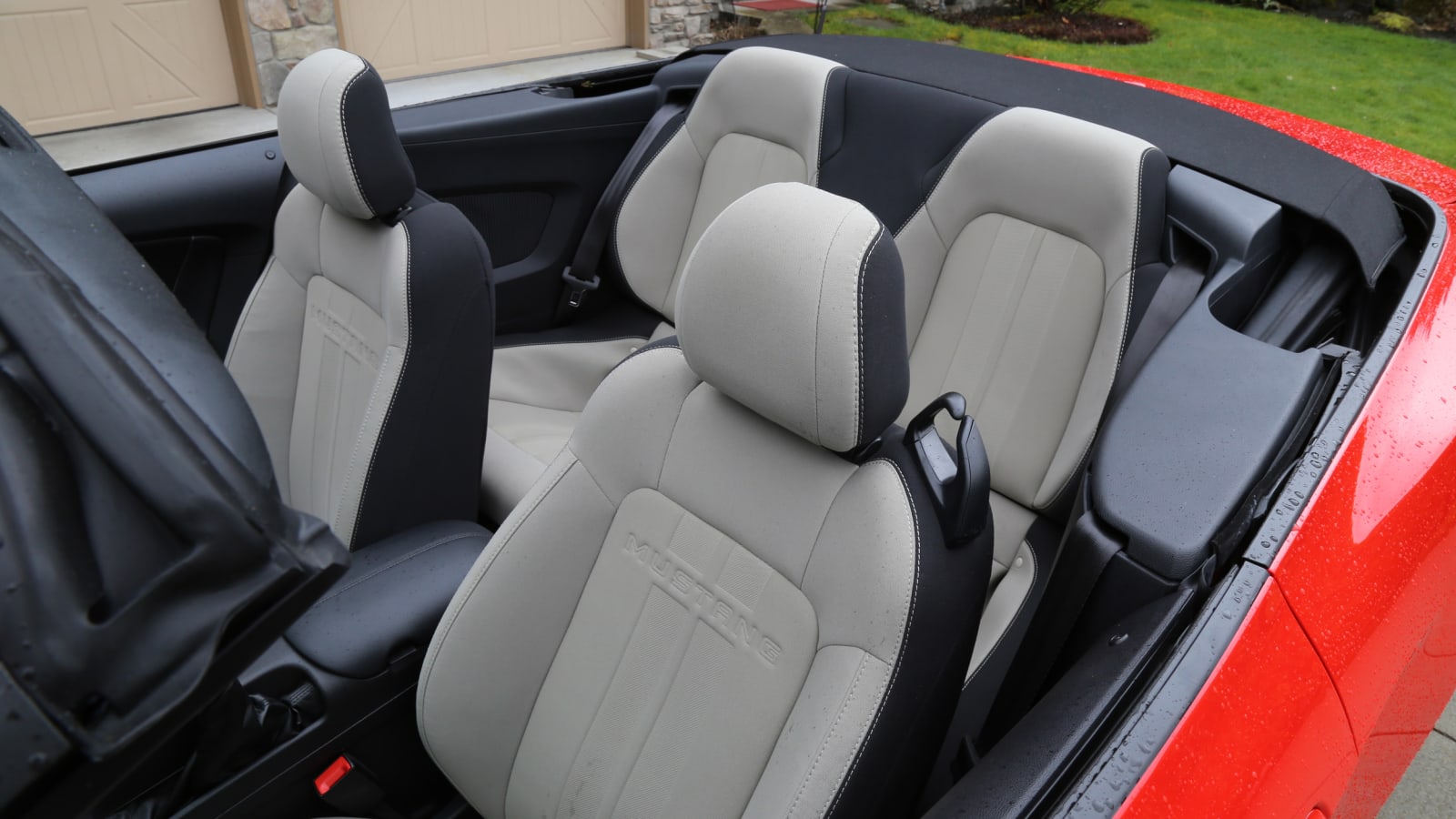 More than that, Premium trim gets you leather seats. The cloth seats in the test car were drab gray — and in a convertible, where the top’s down and the interior is exposed for all to see, they seemed especially dreary and of an economy-car grade. They were perfectly comfortable, so you should check out the cloth seats in black, which might look better, before you pony up an extra $5,000. But they stood out as the only misstep in a vehicle that otherwise takes your expectation of a Mustang and runs with it.