Despite going more than a decade without a complete redesign, the Dodge Challenger is alive and well, and still worth your consideration. Primarily, it offers more of a classic muscle car experience focused on straight-line performance and comfort that its rivals from Ford and Chevy that skew closer to sports car dynamics. The Challenger has the brash, broad-shouldered design to match that muscle car feel, too. And its big body brings more space and practicality than the competition.

The 2020 Dodge Challenger also has a few unique bragging points. It’s the only one of the modern pony cars to offer all-wheel-drive, which is a boon to people living in snowy parts of the country. And the Hellcat Redeye is still the most powerful pony car on the market with a whopping 797 horsepower from its supercharged 6.2-liter V8. Of course, there is a multitude of other Challenger models beyond those two examples, though, with many customization options from colors to wheels and trim. We think pretty highly of them all, proving that just because something is getting on in years doesn’t mean it’s any less relevant.

The 2020 Dodge Challenger brings a small number of updates. There are new wheel designs for every trim except the base rear-drive SXT. Three new colors are available with typically excellent Mopar names: Hellraisin, Sinamon Stick and Frostbite. Dodge has also made some welcome efforts to spruce up the interior with stitched dash and door panels on leather-equipped Challengers, carbon fiber trim and faux suede options for V8-powered cars and caramel-colored Alcantara for the GT, R/T and R/T Scat Pack trims.

The Challenger’s interior certainly isn’t as characterful and flamboyant as its exterior would suggest. The Mustang and Camaro are more interesting and distinctive inside. Still, there are some interesting design flourishes that spruce things up, from the base trim’s standard houndstooth cloth to the two-tone leather choices available as options. Besides, we’re not sure how flamboyant you need the interior to be in a car available in electric orange, blue, green and purple paint colors.

Furthermore, what the Challenger interior may lack in visual pizzazz, it makes up for with space (see below) and technology. A 7-inch touchscreen is standard, but all trim levels have an 8.4-inch version available as an option or standard. Both are among the easiest to use in the industry, and we prefer the 8.4-inch unit in particular to what’s offered by the Camaro and Mustang. Heck, the Ford doesn’t even come standard with a touchscreen, let alone the Apple CarPlay and Android Auto that are included on every Challenger. 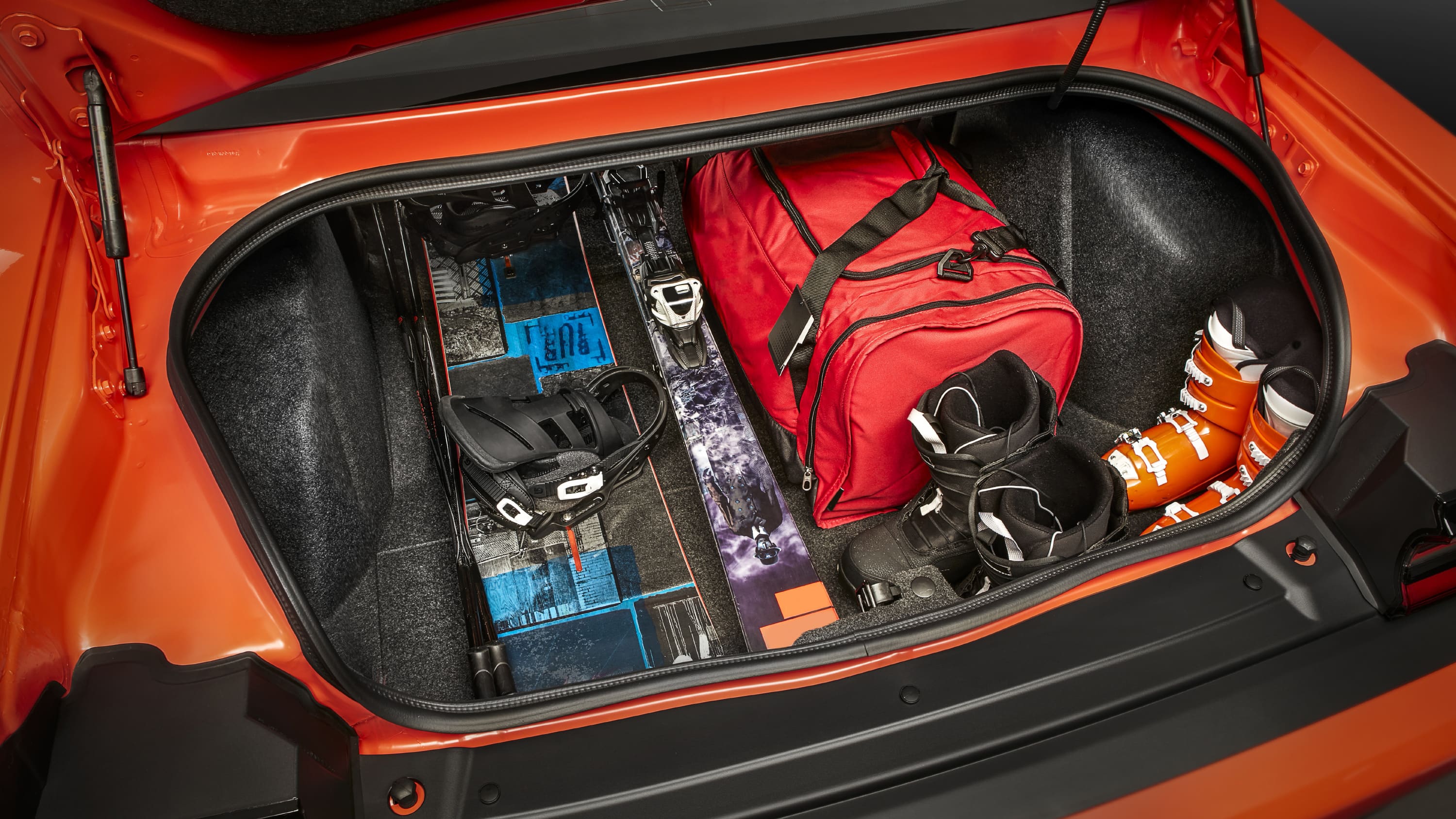 How big is it?

For a performance coupe, the Challenger is enormous. It’s nearly 9 inches longer than a Camaro or Mustang; 3 or 4 inches taller, respectively; and its wheelbase is 6 or 9 inches longer. The most basic Challenger SXT weighs 400 pounds more than a V6 Camaro. While that size is definitely a detriment to the Challenger’s handling and straight-line performance, it’s a boon for interior space and everyday functionality. Unlike in the Mustang and Camaro, actual adults can fit comfortably in the Challenger’s back seat, while its 16.2-cubic-foot trunk would be big for a midsize sedan. The Camaro’s is nearly half the size and it’s opening is awkward. As such, it’s much easier to justify buying a Challenger to be a daily driver. 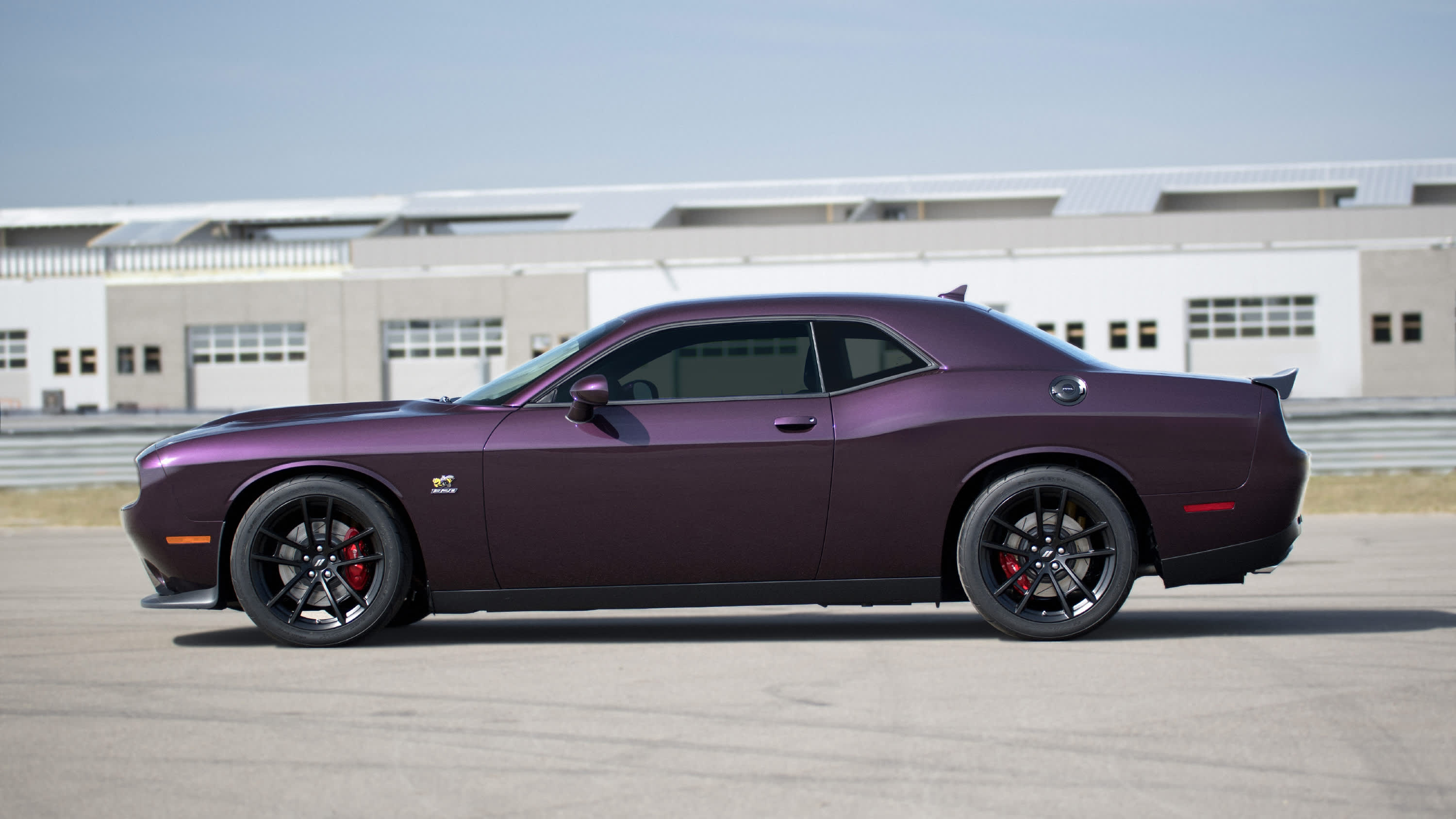 What’s the performance and fuel economy?

We’ll say one thing for the Challenger, it provides plenty of choice. Yet, even if you stick with the base engine, you’re doing OK. The SXT and GT get a 3.6-liter V6 good for 305 hp and 268 pound-feet of torque. You can expect a zero-to-60 time in the low-6-second range, which is pretty quick, but ultimately pokier than the four-cylinder Camaro and Mustang. An eight-speed automatic and rear-wheel drive are standard, but you can add all-wheel drive – the only engine so offered. Fuel economy estimates for the 2020 Challenger were not available at the time of this writing, but we think it’s safe to say that those from 2019 should carry over. For the base engine, that means 23 mpg combined with RWD and 21 mpg combined with AWD.

Next up is the 5.7-liter V8 found in the Challenger R/T good for 372 hp and 400 lb-ft of torque with the standard eight-speed automatic. It goes up to 375 hp and 410 lb-ft with the optional six-speed manual, which seems like a pretty great reason to get a three-pedal car. Fuel economy is 19 mpg combined with the automatic and 18 mpg combined with the manual. This engine basically shaves a second off the 0-60 time.

The R/T Scat Pack model has a 6.4-liter V8 good for 485 hp and 475 lb-ft of torque regardless of whether you get the automatic or manual. Fuel economy is 18 mpg (auto) or 17 mpg (manual). Again, you’ll be knocking another second off the 0-60 time, which should be in the low 4’s. (For those really interested in taking their Scat Pack to a drag strip, the1320 package adds several mechanical upgrades and subtracts weight for improved quarter-mile times).

Now for the heavy artillery. The Hellcat (pictured below) gets a supercharged 6.2-liter V8 good for an absurd 717 hp and 656 lb-ft of torque. It can be paired with the automatic or manual, and if you’re asking about fuel economy, you shouldn’t be considering a Hellcat. Its 0-60 time is likely only a few tenths of a second quicker than the Scat Pack, but that says more about the limits of rear-wheel-drive grip. Don’t worry, the Hellcat feels like it has an extra 232 horses.

Finally we have the Hellcat Redeye, which is effectively a detuned version of the one-year-only Demon. Its version of the Hellcat engine produces 797 hp and 707 lb-ft of torque. Its 0-60 time should be 3.4 seconds, according to Dodge, while the quarter-mile should disappear in 10.8 seconds.

Given the tremendous breadth of performance available, it shouldn’t be surprising that driving the Dodge Challenger differs greatly depending on the version you get. As such, we recommend testing as many versions as possible to determine which is right for you. We know, it’ll probably make for a really rough day. Beyond models, engines and transmissions, make sure to consider options that can change the driving experience, too. For example, there’s the Performance Handling Package for GT and R/T as well as the Dynamics Package for R/T Scat Pack that upgrade brakes, tires and suspension. There’s also the 1320 Package for the R/T Scat Pack that basically turns it into a naturally aspirated Demon.

Now, for broad strokes, expect every Challenger to be more cumbersome to drive than its muscle car competitors. Its handling just isn’t as good, regardless of the model you choose. Now, its ride tends to be more comfortable, but the magnetically controlled suspensions available on the Mustang and Camaro are actually able to best it in that arena as well.

As such, if your automotive tastes skew toward the handling/mountain-road variety, the Challenger isn’t for you. If, however, you’re more of a high-speed-cruising/road-tripping/shred-the-tires-in-apocalyptic-amounts-of-smoke kinda guy, well, this is definitely the car for you. Indeed, the Challenger is the most like an actual muscle car in this regard, akin to a classic Chevrolet Chevelle SS or the original Dodge Challenger.

What more can I read about the Dodge Challenger?

Our driving impressions of the latest member of the Challenger family, the Hellcat Redeye Widebody. We did not hate it. You can also read more about its engineering and design in our Hellcat Redeye First Drive Review.

What features are available and what’s the price?

There are so many models and options available on the 2020 Dodge Challenger that this section would start to resemble an order sheet if we tried to list it all. Luckily, we provide a pretty clean breakdown here on Autoblog featuring each model’s features, specs and local pricing.

Pricing hasn’t been announced for the 2020 Dodge Challenger at the time of writing. We expect it to be close to last year’s, which ranged from $25,690 for an SXT up to $72,745 for a Hellcat Redeye. We will update this section with official 2020 pricing when it becomes available. 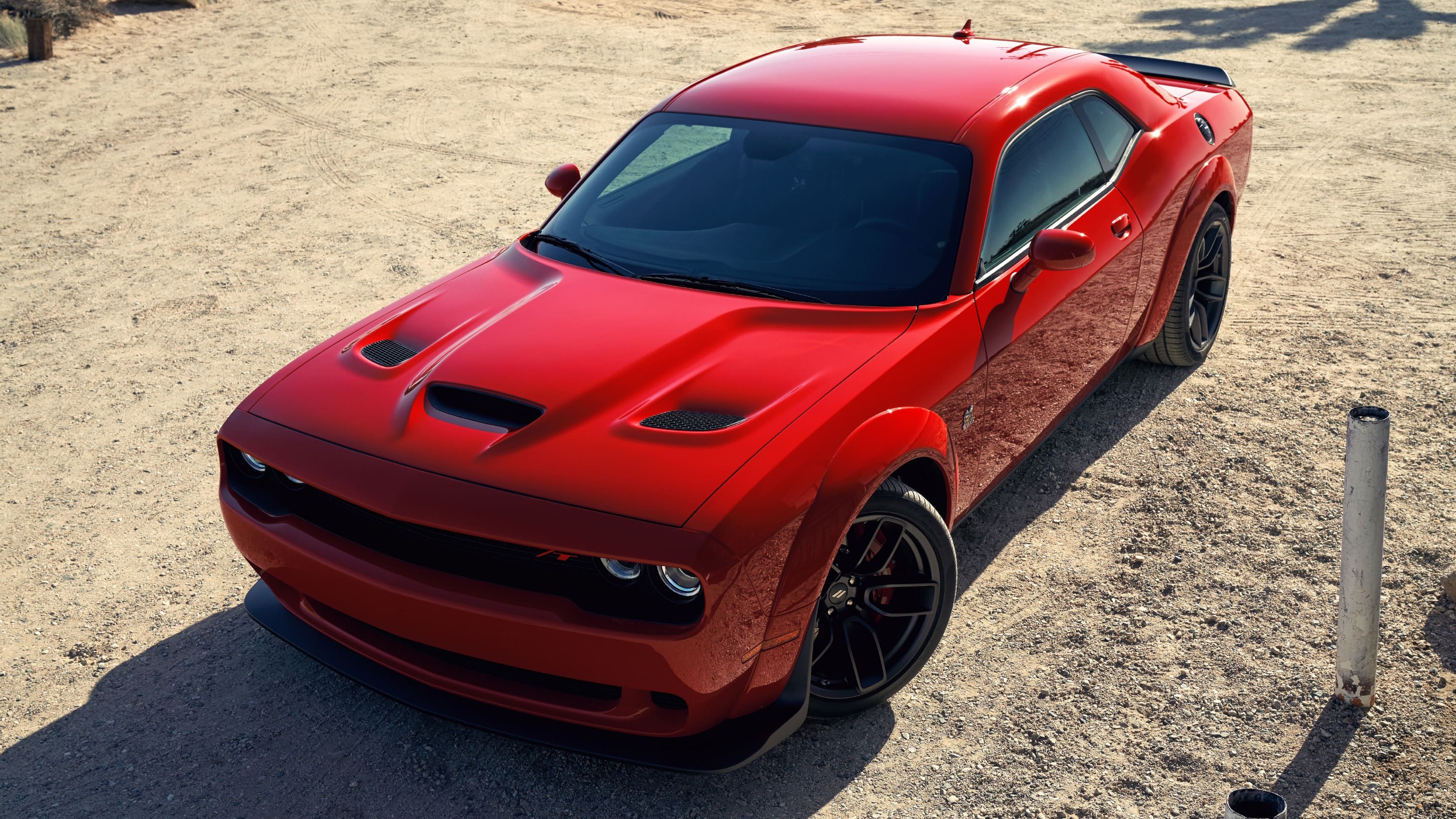 The Challenger comes standard with a typical amount of six airbags and a rearview camera, while blind-spot and rear cross-traffic warning, forward collision warning and adaptive cruise control are optional. Note that the latter two cannot be paired with a manual transmission.

In government crash testing, the Challenger received a five-star overall rating, along with four-star frontal and five-star side ratings. In testing by the Insurance Institute for Highway Safety, the Challenger got the best-possible rating of “Good” in the side and moderate overlap front crash tests, but a second-best Acceptable for roof strength. It got a Marginal rating (three of four) in the new IIHS small overlap front test. This isn’t surprising given how long the Challenger has been around since a complete redesign. Its frontal crash prevention system got a rating of Basic.